A reading from the revelation of Jesus Christ, which God gave him to show to his servants

August 25, 2012
After this I looked, and lo, in heaven an open door!  And the first voice, which I had heard speaking to me like a trumpet, said, "Come up hither, and I will show you what must take place after this."  At once I was in the Spirit, and lo, a throne stood in heaven, with one seated on the throne!  And he who sat there appeared like jasper and carnelian, and round the throne was a rainbow that looked like an emerald.  Round the throne were twenty-four thrones, and seated on the thrones were twenty-four elders, clad in white garments, with golden crowns upon their heads.  From the throne issue flashes of lightning, and voices and peals of thunder, and before the throne burn seven torches of fire, which are the seven spirits of God; and before the throne there is as it were a sea of glass, like crystal.


Holy, holy holy, is the Lord God Almighty,
who was and is and is to come!

Worthy art thou, our Lord and God,
to receive glory and honor and power,
for thou didst create all things,
and by thy will they existed and were created. 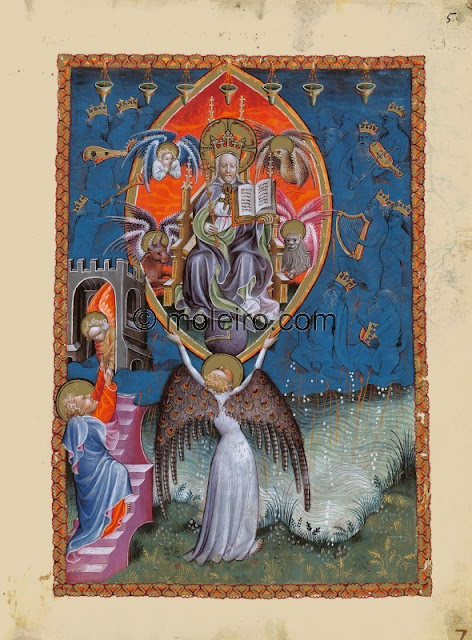 And between the throne and the four living creatures and among the elders, I saw a Lamb standing, as though it had been slain, with seven horns and with seven eyes, which are the seven spirits of God sent out into all the earth; and he went and took the scroll from the right hand of him who was seated on the throne.  And when he had taken the scroll, the four living creatures and the twenty-four elders fell down before the Lamb, each holding a harp, and with golden bowls full of incense, which are the prayers of the saints; and they sang a new song, saying,

Worthy art thou to take the scroll
and to open its seals,
for thou wast slain and by thy blood
didst ransom men for God
from every tribe and tongue and
people and nation,
and hast made them a kingdom and
priests to our God,
and they shall reign on earth.

Then I looked, and I heard around the throne and the living creatures and the elders the voice of many angels, numbering myriads of myriads and thousands of thousands, saying with a loud voice, "Worthy is the Lamb who was slain, to receive power and wealth and wisdom and might and honor and glory and blessing!"  And I heard every creature in heaven and on earth and under the earth and in the sea, and all therein, saying, "To him who sits upon the throne and to the Lamb be blessing and honor and glory and might for ever and ever!"  And the four living creatures said "Amen!" and the elders fell down and worshiped. 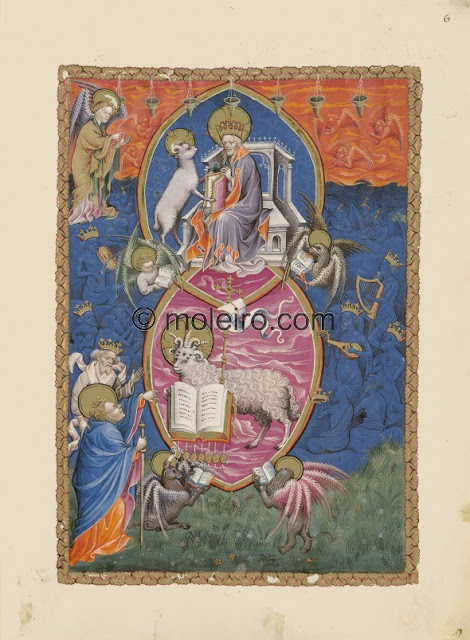