Showing posts from December, 2011
Show all

December 31, 2011
Since returning from the tournament mid-month, after the end of classes : Papers graded and commented on: 16 Fellowship applications reviewed: 6 Books read in preparation for Vestry Retreat: 2 (one assigned by Rector) Articles read in preparation for Mellon discussion next week: 3 Books read in preparation for new course starting next week: 2 Books read for review: 1/2 (started on way to tournament, finished December 23) Communion breads baked: 13 (one batch) Syllabi written from scratch: 1 Items scanned in preparation for new course: 19 Movies watched on iPad while scanning items for new course: 6 (this took two full days) Chicken Ranch (1983, documentary) The Lord of the Flies (1963, movie of the book)  Best in Show (2000, mockumentary--with dogs!) Bottle Shock (2008, based on a true story)  How to Succeed in Business Without Really Trying (1967, movie of the Bob Fosse musical) From Prada to Nada (2011, "a Latina spin on Jane Austen's Sense
Post a Comment
Keep reading

The Unbearable Emptiness of Religious Experience for Its Own Sake; or, Why Having an Object Makes It Possible to Love 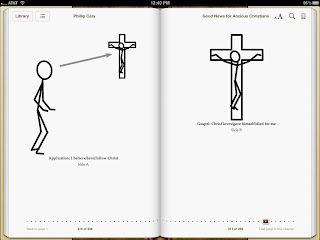 "The turn to experience [in mainline and evangelical Protestantism] is a failure because it's based on a misunderstanding of how experience actually works.  Focusing on your experience waters down your experience, because experience feeds on what it experiences, just as love feeds on news of the Beloved.  We can use the same picture to illustrate this point as in chapter 9.  In Christian faith, your experience is like the arrow on side A of the picture.  It's the verb in a sentence like 'I believe in Christ.'  The arrow is aimed at Christ, just as the verb is 'aimed' at its grammatical object, which is Christ.  Very significantly, it is not aimed at itself, which is why on side B, what the person on side A is experiencing, the arrow, disappears.  That is to say, the experience of faith is not about faith or experience but about Christ.   We don't believe in our experience, we believe in him.  So Christian faith and the experience that comes from it are
9 comments
Keep reading

Another piece of the puzzle

December 29, 2011
"[Dichter] also understood that [American] consumers felt guilt after buying self-indulgent [ sic ] products, so marketers had to sell such things as tobacco and candy as 'rewards' for the deserving.  Much of this is taken for granted now, but when [in the 1940s] Dichter was whispering these sweet nothings in the ears of CEOs, they were revelatory." --" Retail Therapy: How Ernest Dichter, an acolyte of Sigmund Freud, revolutionised marketing ," The Economist (December 17th-30th, 2011), p. 122. Just in case you were wondering why you are so convinced that you "deserve" that cookie, even when you aren't hungry.  Or why you think eating will make you feel better when what you really need is a hug.
Post a Comment
Keep reading 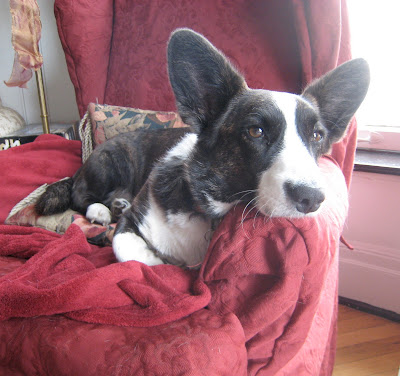 Grammatical Note: How (Not) to Read

December 22, 2011
"Bernard [of Chartres] also used to admonish his students that stories and poems should be read thoroughly, and not as though the reader were being precipitated to flight by spurs.  Wherefore he diligently and insistently demanded from each, as a daily debt, something committed to memory.  "At the same time, he said that we should shun what is superfluous.  According to him, the works of distinguished authors suffice.  As a matter of fact, to study everything that everyone, no matter how insignificant, has ever said, is either to be exceedingly humble and cautious, or overly vain and ostentatious.   It also deters and stifles minds that would better be freed to go on to other things.  That which preempts the place of something that is better is, for this reason, disadvantageous, and does not deserve to be called 'good.'  To examine and pore over everything that has been written, regardless of whether it is worth reading, is as pointless as to fritter away one's
Post a Comment
Keep reading

Doesn't it ever get it any easier?

December 17, 2011
Short answer: No, not if you're doing it right. As, for example, here, where I am trying to explain an insight that came to me at the tournament this past weekend while I was thinking about whether I should just quit trying to fence épée as a second weapon and stick to foil.  I've been competing in épée off and on, I now realize, for going on something like three or so years .  And yet, I am nowhere nearly as strong in épée now as I was when I had been competing in foil for the same amount of time.  By the time I had been competing in foil as long as I have been competing in épée, I was a D.  I'm not even an E in épée at the moment, nor is it likely that I will be any time soon. So why is that?  Well, I don't really get to practice épée much now that our club moved and most of the fencers that I practice with only do foil.  But that isn't all of it.  I could say that it's because I haven't been working hard enough at it, but that isn't quite it eit
4 comments
Keep reading

One of the Gang 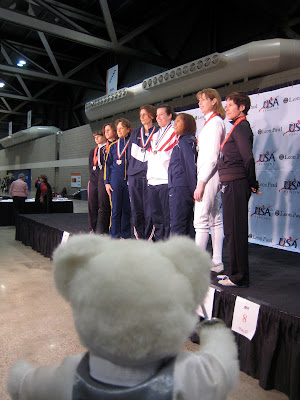 All of my friends got medals this weekend.  My roommate (the one closest to me in the picture) even got two.  And I was back on the ground taking photos for everyone. Yes, I feel a little bit sad.  Who wouldn't?  I've been up there twice (although not in this particular event, Vet Combined as opposed to Vet 40s), and, yes, I liked it.  The question is, why?  Why does it make so much difference whether one gets on the medals podium or not? I used to think that it was because being up there on the podium would prove something about my fencing, that I was good enough.  But, again, good enough for what?  To fence?  I'm already that.  Even the fencer who comes dead last in the event is good enough to fence.  Nobody has to earn the right to compete, at least not as such. Sure, getting up on the medals podium usually means that you got to fence more on that particular day, but, again, it isn't like all those of us standing round taking photos didn't get to fence at
2 comments
Keep reading

December 12, 2011
I do not want to fence this event today. Not. Not. Not. I am terrified. Who am I kidding, thinking I can fence epee? I'm a foilist, I don't practice epee. What on earth was I thinking signing up for this event? Okay, so I've fenced it before. Several times, in fact. Over the past two (or is it three?) years. And I always lose. Badly. Even worse than I did yesterday. Okay, no, yesterday was pretty bad, and even in epee, I have occasionally won the odd bout. But. This is ridiculous. What do I think is going to happen? That I am suddenly going to discover a hidden talent, find that, in truth, I am really an epeeist? That all the struggles that I've been having in fencing were simply owing to the fact that I was fencing the wrong weapon? Yeah, right. Yeah. Right. I do think this. I think about how hard I found it learning to start an attack in foil, so terrified was I of getting hit, but in epee, there is much less advantage in going first (at leas
2 comments
Keep reading

December 11, 2011
National tournament, day two. I should not be writing this, it is only going to be one of those upsetting posts where I tell you all about how terribly I fenced, but the demons are chattering and I have not been able to get them to stop, despite having stayed at the venue to watch my event (Div II Women's Foil) all the way to the end. Chatter, chatter, chatter, chatter. "Be perfect," the first one says. "You missed that action, you rushed, you failed you failed you failed you failed. What did you think you were doing, trying to fence these girls? Don't you wish you had been fencing when you were their age? They are already much much better than you are." "Hurry up," the second demon chimes in. "That girl only started fencing three years ago, and she is miles better than you are. You suck, you're slow, you're never going to learn how to do this." "And you should," Be Perfect chides. "You've been
2 comments
Keep reading

Who is this bear? Do I know her?

December 10, 2011
Look at me. Okay, this would be easier if I could figure out how to upload a photo into Blogger from my iPad. But imagine you can see me, sitting calmly on my fencing bag. (Remembering, of course, that I am just a little bear, not a full grown woman or anything.) There I am. Not crying, not beating myself up, not telling myself stories about how I can't learn and never will. Just sitting. And, yes, I lost today. Not badly, not well. Just lost. And that's it, end of story. Or the beginning of a whole new one. Because I fenced in a national tournament today against the best women in the country my age (well, some of them, not everyone who was signed up decided to fence the event so as to save themselves for their big event on Monday), and...nothing. Or everything. I'm fighting a bit of a caffeine-headache right now, not having my usual supply of tea for the day, but I am still nevertheless oddly calm. So calm I'm not quite sure what to think about it. Beca
Post a Comment
Keep reading

The Limits of Christian Theology