Showing posts from June, 2011
Show all

Men Are From Mars

June 27, 2011
Which means, according to marriage guru John Gray , that when they are stressed, they need to go away and be by themselves in their caves, until they have relaxed enough by watching sports or reading the news to be able to come back out of their caves and interact with the women. Meanwhile, when stressed, the women (being from Venus) want to talk about their feelings, sharing their thoughts and concerns, freely moving from one problem to another, apparently (at least, as the men see it) at random, until they have felt heard and understood. Women feel snubbed when their men go into their caves; men feel got at and blamed when women need to talk about what's worrying them. This is particularly a problem when the men are feeling stressed and need to go into their caves and stay there until they feel better. It is a Big Mistake at this point for the women, who need to talk, to follow their men into their caves and try to keep talking. The solution? According to Gray, the women sh
2 comments
Keep reading

June 27, 2011
I am not sure if I exist anymore. Fencing Bear, that is. There is someone called Rachel who is out there in the Real World, living, breathing, teaching, sometimes even fencing, but she doesn't seem to have anything to say to me anymore. Or through me. Where did she go? Where did I go? I used to have so much to say. Looking back over my posts from these past three years, I had so many ideas, so much to share. But, now, nothing, nothing to say, nothing to share. Maybe I'm just tired. Three years is a fair old time to be writing about one's spiritual struggles; it's hard to sustain so much intimacy, so much openness. But there are things that I want to be writing about, I'm just afraid. Afraid. Afraid. Afraid. Of being misunderstood, yet again. Of not being listened to. Of not being taken seriously. Of being taken too seriously. Of not being able to help. Of needing help, still, even after so much therapy . Of being broken. Of losing faith.
1 comment
Keep reading

Our Father Who Art in Python 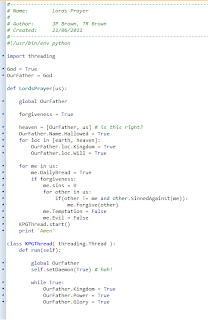 Things I learned while decluttering

June 20, 2011
1.  Even after three carloads of stuff (clothes, linens, books) cleared out in just this past month, not to mention the multiple carloads we've donated in the past two years (yes, it's taken that long !), our apartment still has more stuff in it than when we moved in, nine years ago. Quite a lot of the stuff that we've been giving away we brought with us (not counting my son's outgrown clothes and toys), so where did all the rest come from?  It's like it just grew here.  Or walked in on its own.  I certainly don't remember buying it.  Or did I? 2.  I have plenty of clothes. Over the years, I have had more than enough money to buy more than enough clothes, even enough money to buy fairly expensive clothes. To judge from the clothes that I actually wear, I look best at the moment in deep blues, purples, greens and black. 3.  Back in the 1990s, before it sold out to the beauty fascists, Yoga Journal used real people in its asana layouts as well as publishin
3 comments
Keep reading

June 02, 2011
I was going to start this post with "Right now, I hate Julia Cameron ," but somehow between walking the Dragon Baby to campus, eating lunch with colleagues at an annual end-of-year party, and waiting on somebody to show up for office hours, I've rather lost the fire. Which is the problem. I do hate Julia Cameron for being so unrelievably perky about how well Morning Pages have worked for her over the years. I mean, I've done M.P. just as she recommends, for weeks, months, even years at a time, but I am still waiting on that big breakthrough that she promises will come if only I open myself to God, Good Orderly Direction, the Muse. Instead, I have this blog. Which nobody (okay, "nobody other than my incredibly loyal readers"--I love all of you!) reads, certainly not the literary agents and publishers whom Cameron promises should be knocking at my door by now begging me to let them edit my work. Okay, okay, so that's not exactly what Cameron promis
1 comment
Keep reading