Showing posts from March, 2016
Show all

All Cultures Are Not One

March 09, 2016
Over at Stanford, things are heating up : a group of students are calling for a discussion about whether their college's curriculum should include a "Western Civilization" humanities requirement, and the fur has well and truly started to fly. As the editor of the Standford Review  reports, in the past two weeks since the Review  published its petition, People writing articles in defense of the Western canon have been marginalized and silenced within groups whose policy priorities have nothing to do with curricular requirements. Signers of the petition have reported being personally called out in dining halls and student group meetings, and have been systematically contacted to justify their signatures, They have also been publicly branded as supporters of “racism”, “elitism”, “classism” and “hatred”. Finally, two members of the Stanford activist community have publicly announced that they have downloaded the list of signatories, and intend to use it against voters in ca
Keep reading

Why Study the Humanities 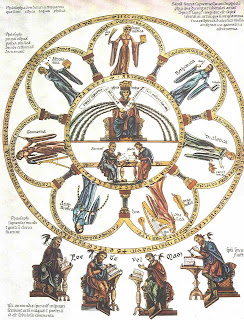 I can tell you in three words: because culture matters . More particularly: because the ideas, images, and stories with which we fill our imaginations shape our souls as well as our actions in the world. I know, I know. This is not the argument that we are supposed to make. We are supposed to talk about "tools" and "critical thinking" and the skills that we can gain in writing and making arguments. But this is like praising a hammer without having any understanding of what you might use it for. You could use it to kill just as easily as you could use it to make something. For the last fifty or so years, we have been using the tools which we develop by studying the liberal arts as much to destroy our culture as to craft it. We need to recover the craft, but to do so, we have to have materials to work with, not just skills or tools that we might apply willy-nilly to anything. Herrad of Landsberg, Hortus deliciarum  (1185): The Seven Liberal Arts Reading, writ
Keep reading 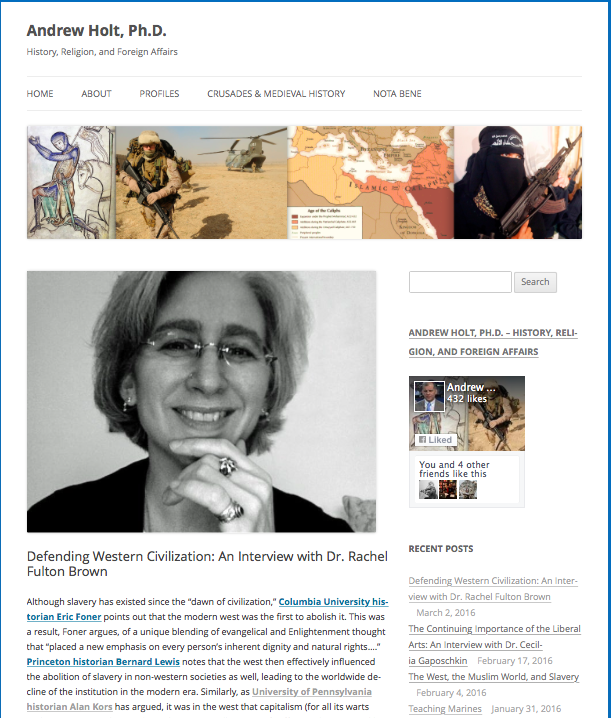 My new friend and colleague Andrew Holt has leaped into the fray and asked me some challenging questions about the kerfuffle that ensued over my " Talking Points: Three Cheers for White Men " post. He also gives a much more coherent account that I ever did of what my actual argument was (gleaned like a true historian from the comments that I made on the Society for Medieval Feminist Scholarship Facebook thread), as well as putting my concerns in a larger scholarly context. Truly, no cloud without a silver lining! http://apholt.com/2016/03/02/defending-western-civilization-an-interview-with-dr-rachel-brown/
Post a Comment
Keep reading
More posts