Showing posts from September, 2017
Show all

The Female of the Species This time last year, I was looking forward to competing as a member of Team USA at the World Veteran Fencing Championships in Stralsund. I had also just started blogging about what I had seen in Milo’s campus tour, and I was eager to enter the fray on the side of the Dangerous Faggot. Little did I know what adventures my blogging would bring! The sense of being caught up in an archetypal story , playing a character I had never thought to be able to imitate . Watching a friend rise in popularity and fame , only to be brought down by the betrayal and calumny of those whom he had called friends. The attention of the media, for good and ill. It has been quite the whirlwind of adulation and infamy, love and hate, all the while I have been attempting to chronicle what it feels like to be  living a myth . And you wonder what fencing has to do with it? Nothing – my competition year was more or less completely shot, so preoccupied have I been since Worlds with finishing my book and b
Keep reading

The Power of Prayer 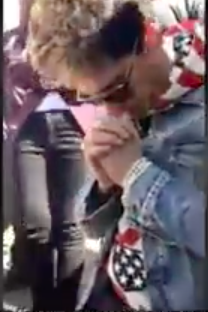 “Jesus Christ is the light of the world, a Light no darkness can extinguish.” There is a little video going the rounds on Facebook which you may have seen . It purports to show the power of the Eucharist driving away the forces of darkness – or, at the very least, purple – in the guise of two young women wearing “Left Action” t-shirts. The women are strolling along a covered walkway, when they encounter a procession led by a crucifer and bearing the Host. The women balk, back off, and scurry away, while choirs sing, “Gloria,” and the subtitle shows a text from Proverbs 28:1: “ The wicked flee when no man pursueth: but the righteous are bold as a lion.” I’ve had a tough last couple of weeks. Not that I’m complaining – much. Just that it is hard still receiving emails and messages from friends keeping me informed about the things that colleagues in medieval studies from around the globe now believe about me. That I “support racism, white supremacy, misogyny, etc.” because I am friend
Keep reading

The Virgin in the Sun 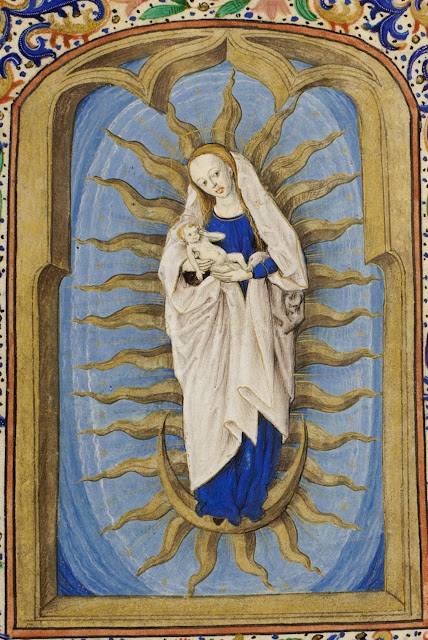 A great sign appeared in the heavens this morning. At sunrise, the sun sat at the head of the constellation Virgo, while the moon lay at her feet. As Virgo rose, the planet Jupiter passed out of her “womb,” while above her head three planets (Mercury, Mars, and Venus) were in alignment with Regulus, one of the nine stars the ancients identified in the constellation Leo. This is not the first time this sign has appeared – the constellation Virgo is in the Sun every September – but it is remarkable for the other planets and stars to align in this way.** So remarkable, in fact, that the author of Revelation took it as the sign which would herald the beginning of a new age with the return of the Lady and her Son: Then God’s temple in heaven was opened, and the ark of his covenant was seen within his temple; and there were flashes of lightning, voices, peals of thunder, an earthquake, and heavy hail. And a great portent appeared in heaven, a woman clothed with the sun, with the moon und
Keep reading 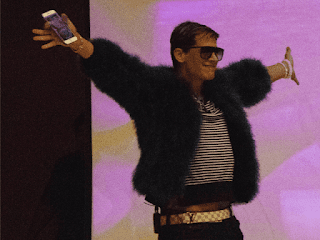 MILO really needs to put this motto on a t-shirt: “Laughter and war.” It is what he called for back in November, when accepting the prize for courage in journalism from David Horowitz’s Freedom Center: So let us fight, but let our motto be Risus et bellum , Laughter and war. Because nothing stings our foes, foreign and domestic, more than our hearty laughter at their lies and nonsense. And also because nothing will better remind us what we’re fighting for than the laughter of Chesterton, of Chaucer and of Shakespeare, and of course the God who inspired them all. I have to confess, I am quite weary today. It is taxing withstanding a SJW attack. My colleagues in academia have, over the past week, used every weapon in the standard arsenal: long-running Facebook threads in which they talk about how deplorable I am; an open letter passed round the internet at the speed of light, garnering (at an estimate) some 1,400 signatures from colleagues at large to be sent to my Social Sciences
Keep reading

Why Dorothy Kim Hates Me 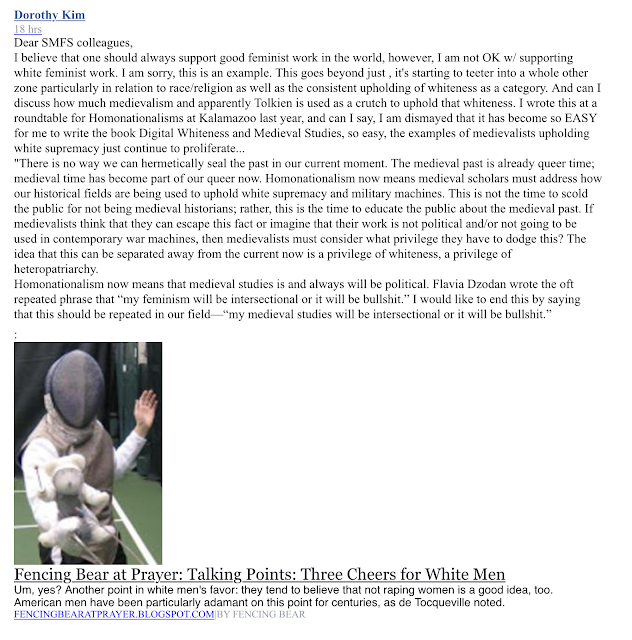 I have never met Dorothy Kim. I do not know why she decided to make me her target in January 2016. Since it is clear that many even in our field of medieval studies do not know – or are refusing to admit that they know – what she has been saying about me on social media, I will show you. On June 5, 2015, I posted a short blog post, listing three “cheers” that I suggest we talk about as products of Western, a.k.a. European, a.k.a. “white” civilization. I entitled it “Three Cheers for White Men.” On January 18, 2016, I learned from friends on Facebook that Dorothy Kim had found this post and was encouraging her friends in the Society for Medieval Feminist Scholarship Facebook group to condemn me for posting it. Here is her initial post: In response, I wrote a long series of blog posts clarifying what I had meant in praising “white” men for idealizing chivalry, consensual marriage, and women’s full participation in our representative democracy. These posts are linked in the origin
Post a Comment
Keep reading

Professor Kim READ FIRST:  Why Dorothy Kim Hates Me , The Color of the House of the Lord It’s back to class for those of us who teach in medieval studies, and my medievalist colleague Dorothy Kim , Assistant Professor of English at Vassar College ( pictured in 2014 ), wants to make sure you understand the stakes . The medieval western European Christian past is being weaponized by white supremacist/white nationalist/KKK/nazi extremist groups who also frequently happen to be college students.  That does sound bad. But, wait, it gets worse! Don’t think western European medieval studies is exceptional.... ISIS/ISIL also weaponizes the idea of the pure medieval Islamic past in their recruiting rhetoric for young male Muslims. If the medieval past (globally) is being weaponized for the aims of extreme, violent supremacist groups, what are you doing, medievalists, in your classrooms? Because you are the authorities teaching medieval subjects in the classroom, you are, in fact, ide
14 comments
Keep reading
More posts