Showing posts from May, 2011
Show all

Diet for a New Apartment 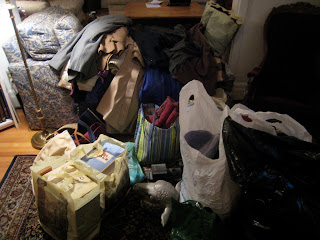 A.k.a. decluttering , tithing , minimalizing . To donate Clothes that don't fit. Clothes that I haven't worn in over three years.  (Not to mention in over twenty.)   Clothes that make me itch.  (And, which, therefore, I haven't worn, sometimes ever.) Shoes that make my feet hurt. Toys that nobody (including the dog) is playing with. Ornaments that don't go with our decor. Books that it makes me queasy to think that I might have to reread.  Or read, even once. Book tapes that nobody is going to listen to again.  (Yes, tapes.  As in cassette.) Bags that we don't need because we have so many others. Excess linens (four big black bags of these not in photo, already donated last month; more found in the current clear-out). To throw out (not in photo) Clothes and shoes that are stained, torn, worn out.  Plus underwear that doesn't fit. Broken foils, torn lames (particularly ones that were my son's ). Old laptops.  (I mean really old.  So old they
Post a Comment
Keep reading

May 20, 2011
Or words and phrases she seems to understand when I talk to her, at least to judge by her behavior (but then how else would you judge?). Yes (meaning, "You can do that") No (meaning, "Stop doing that") Sit Wait (with hand gesture: palm flat over eyes) Okay (typically as a release from "Sit" or "Wait") Off (meaning, "Stop doing that" as well as "Get out of there") Out (as in both "Do you want to go out?" and "Get out of the flowerbeds!") Stay (understood, if not always obeyed) Breakfast (definitely understood) Dinner (ditto) Cookie (ditto) Porch (as in, "Let's go sit on the porch!") Go pee Go poop (probably; less clearly understood than "Go pee!") Go to your room (meaning, "Go get in your crate, there's a cookie there for you!") Dry, dry, dry (meaning, "I'm going to get the towel and dry you off") Rope (meaning, "Stop tugging on my r
2 comments
Keep reading

Skeletons in the Closet

May 17, 2011
My family has so many skeletons in the closet, it's amazing there's still room for the coats. Adultery, alcoholism, divorce, drug abuse, mental illness, suicide, not to mention chain-smoking (my father and grandfather, not me!): we've had it all and then some, just in the time that I've been alive. Who knows what else lurks in our past? (Other than slave-owning--yup, back when the Fultons still lived in Virginia before the Civil War; my grandfather seemed pretty sure about this from his genealogical research). And yet, to look at us, we are pillars of our communities: physicians and teachers and scientists and scholars, ministers and artists and Air Force generals. How is it that our outward appearance to the world could be so at odds with our many-storied reality? Being Fencing Bear, I am (as I'm sure you've guessed) itching to write about some of this, if only to figure out what it all means. But I am fairly certain that this would piss off my family; no
2 comments
Keep reading

May 17, 2011
Imagine this. Here you are, an innocent little Fencing Bear, busily blogging for months about the trials of therapy , having her eyes lasered , trying to declutter her home, trying to get to fencing practice now that her club has moved, all sorts of completely self-centered activities, having little if anything to do with anybody else (except insofar as her husband, son, dog and cat are caught up in the decluttering), and along comes someone who is living through crises of his or her own who almost never reads the blog, knows next to nothing about what has been going on in Fencing Bear's life, and who only knows that Fencing Bear is inclined to blog about some of the more difficult things in life (like, I don't know, writing ), and the first thing he or she says is, "You're not going to write about this in the blog, are you?" (Oddly, since Fencing Bear, by her own rules, almost never blogs about other people, except indirectly or to celebrate them as friends.)
2 comments
Keep reading

May 15, 2011
You know what I really hate? Being told, "You need to be supportive of so-and-so," when So-and-so has never been there for me, not once, not once in my whole entire life. Somehow, So-and-so's problems are always bigger, more important, more desperate than mine; somehow, if I am going through a big crisis or have had something good in my life happen that merits celebration, So-and-so's life is always more complicated, always more in need of my support or congratulations than my life is of theirs. You know what I hate even more? Being asked for advice and then told, "That's not what I wanted to hear, stop giving me advice." Oh, well, sorry. I was trying to be, you know, supportive.
2 comments
Keep reading

May 13, 2011
I went to practice last night at my coach's new club .  Everyone was so welcoming, it felt, indeed, like coming home, even though I had never been there before.  It's been a hard winter, so much to live through.  My eyes are still healing , but I can see well enough to drive.  My sinuses seem to be cleared up and I've gotten over the worst of the Levaquin .  My whole body feels like it has been decluttered, just like our home .  And then my new iPad showed up yesterday, so now I can take pictures of my family and friends. It feels like I should have so much to write about, so many things coming together all at once, but I'm struggling here.  Partly it is the after-effects of last night's insomnia: my coach's new club is a fair old distance away, which is going to require me to take a whole new attitude towards (gasp!) driving on the freeway , so when I got there, I wanted to fence as long as I could.  I didn't get home until nearly 11pm last night, all fir
Post a Comment
Keep reading

May 10, 2011
So, we're getting down to bedrock here.  Pretty soon there will be nothing left.  We've demolished the walls that I had built up around me to keep myself safe, exposed the anxieties for the lies that they were, shone light on the dark places of fear and self-doubt, charted the times when I didn't listen .  I appreciate now that nothing that has happened in the past is relevant to things that are happening now; that the important thing is to live in the present, not keep rehearsing the past.  And, well, I've learned that of all of the people in my life whom I was afraid to trust, the one person that I should not have been listening to was myself.  'Cause what do I know about anything anyway, just because I've read a lot of books ? Go ahead, mock me.  Make fun of the times that I've tried to heal myself.  Point to all of the ways that I misunderstood because, out of pride and fear, I thought I had found the answer.  Show me how it's all been in my head
1 comment
Keep reading

May 07, 2011
Still on the decluttering jag .  Highly recommended.  Best cure ever for thinking that you don't have enough stuff.  Started with the five-foot shelf of books, have moved onto the linens, yoga props I never use, odd ornaments that don't fit with our decor, VHS tapes (yup, we still have some of those, just no player), games my son has outgrown, models nobody will ever make.  Have plans to cull my clothes next weekend, but first there is the hallway's worth of stuff to take to the Cathedral Shelter today.  Cannot describe how liberating it is to be free of so much stuff that I and my family neither want nor need.  Better than going shopping.  Better than having a house.  Case in point: I've played the piano not once, but several times this week, and I started knitting a scarf with the kit that I bought at Christmas. Starting to think that maybe St. Francis was onto something.  Just maybe.
1 comment
Keep reading

May 03, 2011
I had a glimpse last week of what it would be like to be normal.  At least, it's what I imagine normal would be like: to be able to look at my husband and feel nothing but tenderness and love for who he is and how much he loves me.  No threats, no anxieties, no misunderstandings.  Above all, no conviction that he is angry at me when he actually isn't.  I've been so deaf.  So blind.  So scared.  It didn't matter what he said to me, I couldn't hear. Nor was it just my husband.  I've been living in fear of what other people were thinking of me pretty much all of my life.  Running scared.  Absolutely convinced that there was no way anybody could actually like me .  That there wasn't some hidden agenda or lie.  That they weren't angry when they said something about what I'd done.  I've heard criticisms when there wasn't even advice, challenges when all they were saying was "Hello," scorn when they were trying to invite me to join them.
6 comments
Keep reading

Damned If You Do

May 03, 2011
You know that medication that I said I got for my sinus infection ?  Well, it turns out that one of its potential side-effects is a ruptured Achilles tendon .  And guess what?  I've been barely able to walk for the past several days because my Achilles tendons are so stiff. Fuck.
Post a Comment
Keep reading

Bad Reasons to Hold Onto Something That You Don't Really Want

May 01, 2011
Yesterday, I took the 1952 edition of Mortimer Adler's Great Books of the Western World that I bought eleven years ago for $400 back to the local used bookstore, where I got $20 worth of math books for my son in exchange.  (He helped me carry the books, it was only fair.)  Thanks to getting rid of the five-foot-shelf's worth of unreadable books (great though the works themselves may be), I was able to move the four-foot-high stack of boxes of Lego bricks out of the entryway and onto a shelf in the hallway alcove and, with a bit of rearranging, the boxes of board games out of the hallway alcove and onto the shelf where the Great Books had been gathering dust for the past nine years.  Things really started snowballing after that.  The entryway is now clear of stuff for the first time in eight-and-a-half years, the hallway alcove no longer looks like a rubbish heap, and I find that it is not in fact the case that what I need is a house.  What I need is an emptier apartment.  Why
Post a Comment
Keep reading
More posts