Showing posts from May, 2013
Show all

Practice Tip for the Week

May 31, 2013
"Adults can hamper progress with their own perfectionism: whereas children throw themselves into tasks, adults often agonise over the mechanics of the movements, trying to conceptualise exactly what is required.  This could be one of our biggest downfalls.  'Adults think much more about what they are doing,' says Gabriele Wulf at the University of Nevada, Las Vegas. 'Children just copy what they see.' "Wulf's work over the past decade shows that you should focus on the outcome of your actions rather than the intricacies of the movements.   She applies this finding in her own life: as a keen golfer, she has found it is better to think about the swing of the club, for instance, rather than the position of her hands.  'I'm always trying to find where best to focus my attention,' she says.  Similarly, if you are learning to sing, then you should concentrate on the tone of the voice, rather than on the larynx or the placement of the tongue.  Study
Post a Comment
Keep reading

May 18, 2013
Everything hurts.  My back hurts, particularly a point over my right shoulder blade.  My hands hurt, particularly my right hand if I try to clench it.  My feet hurt, particularly the top of my left foot, where the tendons are.  All of my joints are stiff, particularly my right wrist and ankle.  All this after getting a massage on Tuesday and spending the week doing something other than sitting on my couch with my laptop on my lap, writing. Talk about Sitzfleisch .  I looked it up on Wiktionary : "The ability to endure or carry on with an activity," from the German for "the ability to sit still."  I have another definition: "The way your body feels after you have been sitting still for five months working on your book manuscript." It creeps up on you.  Back in the winter, when it was so cold that it took a full five minutes to get the layers on before taking the dog out for her midday romp, I just thought I felt stiff because I had so many clothes on.
2 comments
Keep reading 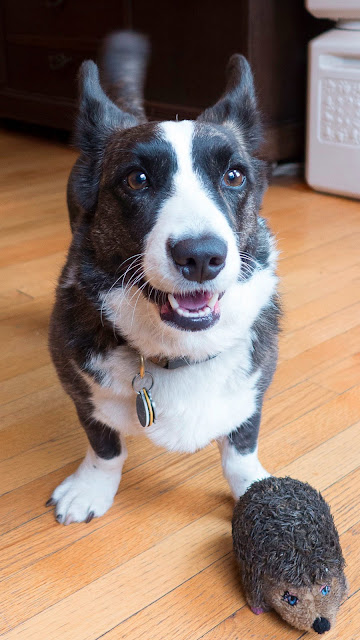 After three-and-a-half years' constant practice, the Dragon Baby caught her first squirrel this week.  There we were, almost home from our lunchtime walk, and one minute she was next to me on the sidewalk, while the next she was emerging from the other side of a tree with a young squirrel in her mouth.  It all happened so fast, I wasn't quite sure what to think, never mind do, so I stood there, entranced, as the squirrel squeaked and the Dragon Baby tried to shake it just as she has her toys so many times.  But squirrels, unlike stuffed hedgehogs, have teeth and claws and muscles with which they can fight and move.  Just as quickly as she had caught the squirrel, suddenly it was away back up the tree, barking and looking down at us as the Dragon Baby, undaunted, settled back down on the sidewalk so as to keep an eye on her prey. And I thought it was bad when she ate the baby mouse !  When she caught the squirrel, my first thought was that she was surely going to kill it--t
Post a Comment
Keep reading

May 05, 2013
As promised , my new blog .  Comments welcome!  Check out "About" as well as the first post on "Getting Medieval."  "Sources" will be added as they make themselves useful.
Post a Comment
Keep reading
More posts