Showing posts from March, 2013
Show all

Plays Well with Others

March 25, 2013
This is not something, I suspect, that any of my teachers would ever have said of me when I was growing up.  I cordially despise all team sports, particularly those involving chasing a ball around a large field; I feel awkward and uncomfortable at the thought of most large parties; I'm not terribly good at sharing my work, even now with Prof. Boice's advice to spend as much time socializing around writing as one does writing.  But there is one thing that I always, always, always wanted to do when I was growing up and somehow never had the chance to try: play music with other musicians. Sure, there were one or two times when I was somehow co-opted into providing a piano accompaniment for someone else's singing (e.g. once at church for the littler kids), but they were absolute disasters.  I didn't want to be leading the music, to be responsible for providing the tune; I wanted (I now realize) to be singing along.  Which one can't when playing the piano, at least not
Post a Comment
Keep reading

March 23, 2013
My son, now almost 17, has cousins on his father's side of the family only a few years younger than he whom he has never met.  They live in Vientiane, Laos, with my husband's middle brother and his wife, herself a native Laotian.  My son has another cousin, just born, who lives in Cambridge, England, with his father's half-brother, who is a Muslim convert, and his second wife, who is also Muslim.  My half-brother-in-law met his first wife, also a Muslim, in New York while he was studying at my Alma Mater; she, like me, was an American, while the brothers (if you haven't guessed yet) are English.  My husband's other brother, whom we have not seen since my son was a toddler, lives in York, England.  Their father, my son's grandfather, is now living somewhere in China when he is not in Laos; we haven't seen him since we were in England in summer 2008. Meanwhile, on my side of the family, there are my younger brother and his daughter, who live in Antwerp, Belg
1 comment
Keep reading

Up in the Air

I'm too tired to have anything particularly coherent to say, but this is just too cool: a WiFi-enabled aircraft! Mind you, figuring out how to balance my keyboard and iPad on my lap is proving a bit more than my sleep-deprived, dehydrated brain can manage. Plus I realize my seatmates could read whatever I am writing over my shoulder if they were so inclined which is making me feel a little shy, but I am determined to give you a report from the air, so here goes.   It should be something momentous, a great insight into the wonders of modern travel. Can you imagine doing this even five years ago? (Okay, maybe you could--I'm not exactly in the business world; they seem to get connected faster than we academics do.) I can barely imagine doing it five months ago; this is the first trip that I've been on that had such possibilites (the aircraft on my flight to Reno had the option as well, but then I was so sleep-deprived I just fell asleep). Mind you, I realized last we
Post a Comment
Keep reading

The Trajectory of Success 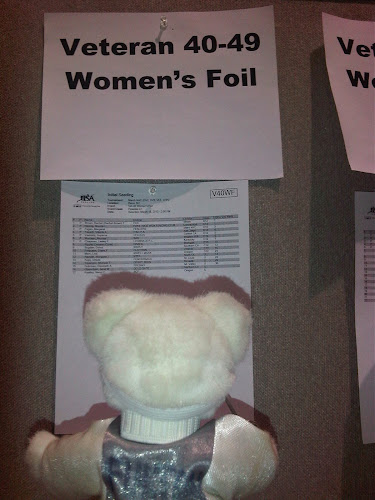 You may recall that I don't have a fencing notebook anymore, having torn up the last one while at the tournament in December. I didn't buy a new one either. But I needed (or so I thought) to keep track of my pool bouts yesterday, so I pulled my emergency notebook out (you know, the tiny Moleskin that I keep in my purse, just in case I don't have a proper notebook handy), and tried to find somebody who had the bout order. Which means I also started writing down my scores from my pool bouts, so that, you know, I could make sure the directors recorded everything correctly. But I never did find someone with the bout order, so I simply had to sit there, not quite knowing when next I was going to be up. And you know what? It was fine. I have done enough pools now to have a feel for how the bouts go, even if I haven't memorized the exact order. So I didn't panic even when we started double-stripping. I just went to the strip when I was called, and I fenced.
Post a Comment
Keep reading

Been There, Done That

I am having a hard time focussing. I'm in Reno for a tournament, hanging out with my girl friends. I should be a little bit anxious. It would be better if I were a little bit anxious. But I'm not. Not yet, and that makes me worried. Not, mind you, worried enough to start getting my head down and getting ready for the bouts. Just worried enough to try to write something before my roommate and I pack up and go to the venue.   But I don't have anything to say. I've been here now, pre-event, over and over and over again. I know what I can control and what I can't. Not that that means that, if I don't fence well this afternoon, I will be all hunky-dorey about it. I'm sure I won't be (we all remember Milwaukee, right?). But I'm not scared like I used to be about having to prove something about my fencing as such. (Is that true? Double-checking...I could be deceiving myself.)   Today's fencing is today's fencing. I slept rela
Post a Comment
Keep reading 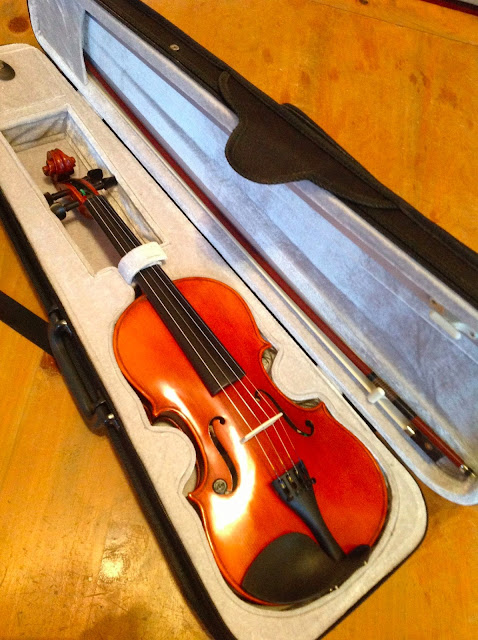 A fiddle of my very own!   How can I possibly describe how happy I am except by contrast with how I miserable I felt all last week? Last week, at the end of our second session of classes, I went to the music store to turn in my rented instrument and purchase my own.  I was so nervous, I nearly cried when the clerk told me that they didn't have any student-grade fiddles, only used ones that were more expensive.  My teacher had assured me that the student fiddles that the store sold were good ones, so when the clerk discovered that, in fact, they did have some in stock, I simply grabbed the first one she offered, gave it a few strokes with my bow, and bought it. What a mistake--but then how was I to know?  One of the things that had made me most nervous was the thought of losing the training wheels that I had inherited from a previous renter on my first instrument, the tapes on the fingerboard showing where to put my fingers.  When I tried out the new fiddle, I was so rel
Post a Comment
Keep reading

It's possible that I may be trying to do too much. I finished the draft of chapter 3 a little under two weeks ago, a week or two before (back in January) I had thought I would, after which I launched myself into reading Richard of St. Laurent's 840-page (ed. A. Borgnet, 1898) tome on the praises of the Virgin Mary .  In Latin. I've read long books in Latin before, but never, I have to confess, one quite this long.  The Latin is fairly easy, but even so, by the end of my Brief, Regular Sessions for the day, my head is quite figuratively spinning.  And I mean that literally.  Sort of.* But I want to finish reading the book as soon as I can so that I can get back to writing again.  Before it gets too late.  Before I run out of time and my leave comes to an end.  (Still six months away, but the pages are flying off the calendar....) I would read faster if I could.  Thanks to all the work I've done the past two years on my translation, mirabile dictu , my Latin se
Post a Comment
Keep reading

March 03, 2013
" Suppose God came and spoke to us here in his own voice (he never ceases to speak through his scriptures [ per litteras suas ], of course).   But now, imagine that he is here and saying to one of you, 'Do you want to sin?   All right, go ahead, then: sin.   Do anything that gives you pleasure.   Anything that you love on earth shall be yours.   You are angry with someone?   Fine: let him die.   You want to lay violent hands on someone?   He is yours to seize.   If you want to hit someone, you can hit him.   If you want someone condemned, condemned he shall be.   Whatever you want for yourself, you shall possess it.   No one is to oppose you, no one is to say to you, "What are you doing?"   No one will say to you, "Don't do that."   No one will say, "Why did you do it?"   All the earthly things you crave shall be yours in abundance. You shall live to enjoy them not just for a time but always.   But there is just one reservation: you will nev
Post a Comment
Keep reading
More posts