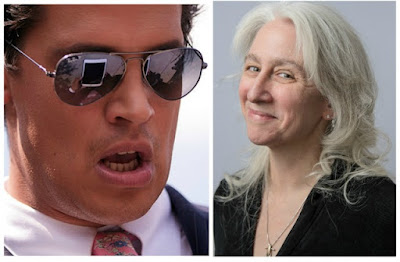 I like Milo because he is Catholic, conservative, and trying to do good after spending his twenties living riotously and hurting more people than he should--or meant to.

I stood up for him this week and all along during his campus tour because he was doing something that nobody else in academia, including myself, would: bring out into the open the things that, in academia as in our culture at large, nobody has been willing to say lest they get shamed, shouted down, and told to shut up.

He talks about the things I care about: the problems with gender studies, the importance of Christian virtues, the value of Western civilization, the greatness of America as a country founded on ideals.

Yes, he made jokes at the expense of other people, particularly people whom the entire national media and all my liberal friends and colleagues say he shouldn't, but this is part of the point: unless you have been a conservative in academia for the past thirty years, you have no idea how hard it has been not making these jokes all along.

As one of my new friends on Facebook tried to explain to another of my friends this week, conservatives, especially Christian conservatives, are tired of being the butt of everyone's jokes and not being able to hit back (because, being Christians, we usually don't). Milo gives them permission to laugh. Being a Christian, he does not tell them to hit anybody, except with laughter.

What happened to Milo this week was a planned, targeted political take-down. The video clips that were used to make it seem like he supported something against which he fought his entire journalistic career were taken out of context, both out of the immediate context of the conversations in which Milo was engaged when he made these statements, and out of the life context that became clear in his press conference: he himself is a victim of underage sexual abuse and was incapable, until now, of letting himself think that.

Unlike those who use their own status as victims or the victimhood of others whom they make it their cause to protect, Milo never claimed to speak as a victim, only a champion of the weak.

Because he hates those who use their own victimhood or the victimhood of others as a kind of shield, he never claimed that he should not be attacked. But he refused not to hit back.

Milo is saying we have the categories of victimhood wrong and that we, as a society, are hurting the very people liberal Leftist ideologies claim to protect. For this, the Left cannot forgive him, but neither, as we learned this week, can the Right.

So, yes, I stood up for him against my colleagues, my family, and my friends. Because he has been standing up for me and conservative academic Christians like me when nobody else would.

More on my defense of Milo

October 18, 2008
Me, writing political commentary?! Stranger things have happened, like, for instance, having a candidate for president who is intelligent and articulate and able to put issues before what the other candidate's campaign is saying about him personally. So, I watched the debate Wednesday night with increasing hope and concern: is it possible that America might go so far as to elect a president who, while rich*, was also at the top of his class in school? Or are we going to fall yet again for the dumbing down of our politics to the level of personal grievance and feelings? It all hinges on Joe the Plumber. But who is he? I don't mean in real life; everyone knows that now . Even on Wednesday, Senator McCain didn't really care about who "Joe" was or his staff would have bothered to find out, for example, that "Joe's" full name is Samuel Joseph Wurzelbacher and that he isn't even licensed by the Association of Plumbers, Steamfitters and Service
Keep reading

About that livestream... The Most Accurate Image Ever Posted on the Internet I really cannot believe that I have people reading my Telegram channel who don’t get what Ye just did [in his interview on Thursday ], so let me pretend it is possible to break a rhetorical effect down dialectically so that you can feel smart again. I doubt it will work—I tried for years on my blog to describe why Milo did the performances he did, and I STILL have colleagues in academia convinced that a) Milo is nuts, and b) I am nuts for defending him—but, as my mother always loved saying, I am Missouri-born and therefore stubborn as a mule, so take this as DONKEY WISDOM about Ye.  What is the greatest taboo in our culture? Is it saying, “I love Satan”? Is it saying, “I love Judas, I would have kept the 30 pieces of silver”? Is it saying, “The Trinity is a nonsense doctrine invented by Rome/Saul-the-Fake-Apostle/paganism”? Is it saying, “Jesus was a fraud who is now in hell burning in excrement and I would
Keep reading