March 24, 2017
Title IX wants girls to be boys. Doubt me? Name a single originally female sport that high school, college, and university women play. No, not gymnastics, that was originally a guy thing. But it doesn't really matter. According to Wikipedia (my go-to source for what the Woman in the Street knows), at the collegiate level the five top women's varsity sports as of 2008 were 1) basketball, 2) volleyball, 3) soccer, 4) cross country, and 5) softball, while, as the article notes approvingly, "since 1972, women have also competed in the traditional male sports of wrestling, weightlifting, rugby, and boxing." 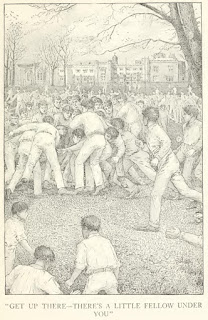 Why on earth should women want to play rugby? Well, why do men? I was thinking about this question last night on my way to fencing practice. My audiobook for the drive these past several weeks has been Robert Tombs's The English and Their History, and last night he was talking about Victorian manliness. Specifically, about the way in which "the Victorian age moralized sport as a creator of manly Christian virtue."

Specifically, about the role of sport in schools.

Blame Thomas Hughes. It was Thomas Hughes's Tom Brown's Schooldays (1857) that established the timeless ideal of the English public school (think Hogwarts) at which the children of the ruling elite would be transformed into gentlemen (think wizards) through a discipline of team games (think Quidditch). In Tombs's words:


Hughes made [Dr. Thomas Arnold, the headmaster of Rugby School] a hero and pioneered the school story as a new literary genre. Hughes was also a herald of the new cult of games, especially "rugby," the variety of football practised at the school, though Arnold himself had in fact not been interested in such unspiritual pastimes. But Hughes set an adventurous and yet Christian "manliness" against an older rakish masculinity represented by the drunken and lecherous bully Flashman. Team games became lessons in courage, fairness, comradeship, leadership--in short, "playing the game."

Hitherto, explains Tombs, activities that we now admire for their role in disciplining character had been looked down upon as frivolous and inclining to vice. But during the 1850s, sport became the route to virtue.


The common English use of sporting phrases in political and social contexts, noticed by many foreign observers, implied an increasing acceptance of social conventions--"playing by the rules" in individual, family and public life. The "stiff upper lip" of  the public-school hero, and the self-improvement, self-education and responsibility of the trade union leader both reflected and propagated these values.

All sorts of expectations about the way social and political life ought to be derive from this English emphasis on team sports: that there ought to be a "level playing field." That the players should practice "good sportsmanship," and not take victory or defeat personally. That the teams should be relatively equal, with the same number of players on both sides. That play should proceed according to mutually-acknowledged rules. That players should abide by the rules and not cheat.

To judge from my fifty-two years as a woman, these are ideals that boys and men seem to get more or less instinctively--and enjoy--even as an historian I am forced to acknowledge their Victorian roots. Boys seem to love arguing the rules of the game. They worry about making sure the teams are fair. They negotiate constantly about whether the rules are being observed properly. And they don't seem to take it personally when the call goes against them--or, if they do, they know in their hearts that they are behaving badly, unsportsmanlike.

Women, not so much, unless they have been athletes, and even then, there are differences. Women, in my experience, have a harder time not taking competition personally. They worry about whether the rules need adjusting so as to make it easier for everyone to play. They don't like excluding players even at the risk of compromising the integrity of the game. They bitch about each other mercilessly if anyone defies the norms of the group, for example, by winning too much. (Ladies, we all do it, you know we do.) And they all like attracting the attention of the men, even the ones who aren't interested in men.

There is a famous episode in the Gospel of Thomas when Simon Peter says to Jesus: "Let Mary leave us, for women are not worthy of life." But Jesus tells him: "I myself shall lead her in order to make her male, so that she too may become a living spirit resembling you males. For every woman who will make herself male will enter the kingdom of heaven."

Back in my college days, we were taught that Jesus was being horribly sexist here, implying that it was only males who could enter the kingdom of heaven. I had been a swimmer in high school and knew all about how hard it was to swim as a woman. (Breasts and Lycra--not a happy combination.) Wouldn't it have been better if I had been able to become male, so as to be able to compete with the men?