The Bridegroom Calls to the Virgin: “Come, You Will Be Crowned!" 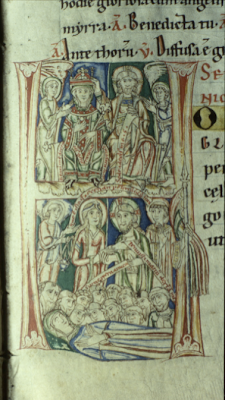 "After, however, the virgin-bride-mother (virgo Sponsa mater) has been taken up gloriously by the Son, and has taken her glorious seat with the Bridegroom above the angels, I think that I ought to be silent, rather than dare to speak concerning the honor in which she rejoices and the joy with which she sees herself to be honored. For what my intellect or one similar to mine does not grasp, what manner or effect of revelation is possible, when whatsoever that intellect thinks to contemplate, cannot be explained easily in suitable words? This much clearly can be said, that where the Son is--who set up the flesh he assumed to the right of the Father (whatever it is that Scripture calls the right)--there also is his mother, who gave to him of her own flesh, who gave birth from her womb to the God-man without loss of her corporeal integrity.

"There, it is said, she is crowned with glorious honor and honorable glory, and from him, and in him, and with him whom she bore, she glories, partaking of her desire; and the Bride thus cleaves to her Bridegroom with true and sincere embraces, so that, her love having been satiated, she abides in the irremissible desire of love. The mother is therefore with her Son not only in spirit (about which there can be no doubt whatsoever), but also in body, which does not seem at all incredible, for although canonical Scripture does not declare it with evident proofs, pious faith is however led to this belief with truthful arguments, and which, although he does not prove it sufficiently who is hasty in word and knowledge, our Augustine asserts is worthy to be believed.

"Nor is it troublesome to the angels if they see the Bride to occupy the royal throne with the Bridegroom, the mother with the Son--he whom she held before in her bosom, now holding her on a celestial throne--or if they see human flesh to be honored gloriously about themselves in the mother and the Son, and the nuptials, which were begun joyously in our presence, there to be consummated all the more joyously."

October 18, 2008
Me, writing political commentary?! Stranger things have happened, like, for instance, having a candidate for president who is intelligent and articulate and able to put issues before what the other candidate's campaign is saying about him personally. So, I watched the debate Wednesday night with increasing hope and concern: is it possible that America might go so far as to elect a president who, while rich*, was also at the top of his class in school? Or are we going to fall yet again for the dumbing down of our politics to the level of personal grievance and feelings? It all hinges on Joe the Plumber. But who is he? I don't mean in real life; everyone knows that now . Even on Wednesday, Senator McCain didn't really care about who "Joe" was or his staff would have bothered to find out, for example, that "Joe's" full name is Samuel Joseph Wurzelbacher and that he isn't even licensed by the Association of Plumbers, Steamfitters and Service
Keep reading

About that livestream... The Most Accurate Image Ever Posted on the Internet I really cannot believe that I have people reading my Telegram channel who don’t get what Ye just did [in his interview on Thursday ], so let me pretend it is possible to break a rhetorical effect down dialectically so that you can feel smart again. I doubt it will work—I tried for years on my blog to describe why Milo did the performances he did, and I STILL have colleagues in academia convinced that a) Milo is nuts, and b) I am nuts for defending him—but, as my mother always loved saying, I am Missouri-born and therefore stubborn as a mule, so take this as DONKEY WISDOM about Ye.  What is the greatest taboo in our culture? Is it saying, “I love Satan”? Is it saying, “I love Judas, I would have kept the 30 pieces of silver”? Is it saying, “The Trinity is a nonsense doctrine invented by Rome/Saul-the-Fake-Apostle/paganism”? Is it saying, “Jesus was a fraud who is now in hell burning in excrement and I would
Keep reading