Waiting for the Incarnation

December 22, 2010
There are so many things that I've been thinking about and wish that I could find some way to write about, but they're all swirling around in my head in a sort of vaporous chaos, everything connecting to everything else, no place to begin. This is somewhat the state that I've been in for some time with my academic work, plagued with big ideas that seem to want to be expressed, each one a book, each one bigger than I feel like I have time in this life or even multiple lives to explore. Possibly a good thing, but frustrating nevertheless. Where do I begin?

My first impulse here is to want to make a list, but curiously I am resisting even that. What if I make the list and the ideas collapse? Worse, what if they sound silly? Or, once articulated, feel no longer worth pursuing? Perhaps I am enjoying having them floating around in my head taking no definite form, full of possibility but immune from critique. Ha. I am thinking now of what Dorothy Sayers says about the heresies of writing: not wanting to put the blood, sweat and tears into making an idea incarnate. The heresy of wanting only the Father, not the Son and the Spirit.

And yet, I want the Son very much. I am anxiously waiting for Him to be born again this very Saturday. I want so much for my ideas to take physical, material, communicable form. And yet, I'm still cathected. No, that's too mild. I'm still angry. Angry at my colleagues for not wanting to try my experiment in prayer. Angry at them for...curiously, I don't want to say. I don't feel terribly angry just at the moment. What I feel is myself avoiding having to say anything in particular at all. 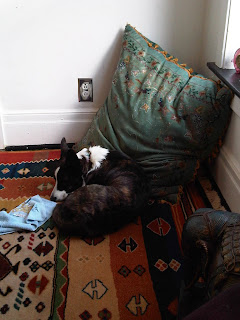 Everything that I read at the moment sparks off ideas for potential projects. I would really like to do something with all the work that I did to put together my course this past quarter on animals. I wish that I could answer all those scientists who persist in blaming the Middle Ages for whatever failings they perceive in the present day. I have a thought about a series of blog posts answering atheists point-by-point on the Creed. And I could tell you things about playing Angry Birds and about what I've been learning from our marriage counselor about asking for support and about what a joy it is to have a puppy for Christmas this year.

But somehow the words aren't coming, just the thoughts. Perhaps I'm just going to have to be patient a little longer. Meanwhile, you can go listen to this beautiful reading of T.S. Eliot, William Everson and Frederick Dale Bruner talking about the journey of the Magi over on millinerd.
academia dogs God writing