July 02, 2019
My colleagues in academia must be so jealous of me. I am friends with the most fabulous faggot on the planet. 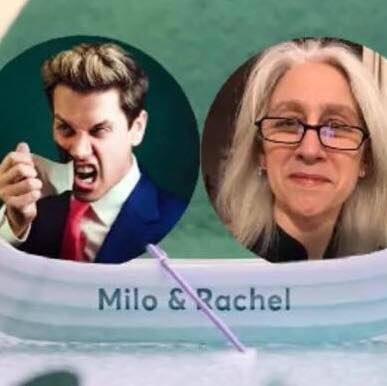 You don’t believe me? Look, it says so, right here in The Chronicle of Higher Education!

Sorry, paywall. Let me quote the relevant passage for you (click on images to enlarge): 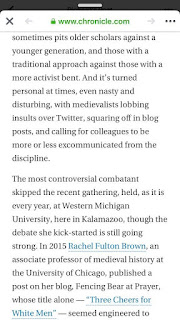 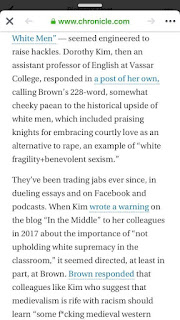 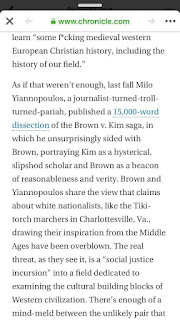 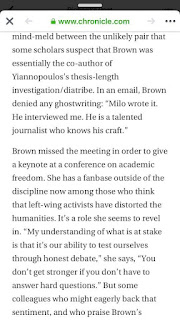 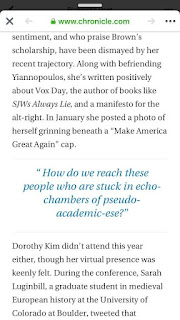 I like “cheeky paean” as an epithet for “Three Cheers for White Men.” And “journalist-turned-troll-turned-pariah” is amazingly mild as a description of Milo.

But my favorite line has got to be this one:


There’s enough of a mind-meld between the unlikely pair that some scholars suspect that Brown was essentially the co-author of Yiannopoulos’s thesis-length investigation/diatribe. In an email, Brown denied any ghostwriting: “Milo wrote it. He interviewed me. He is a talented journalist who knows his craft.”

Have you ever read anything hotter? I have a “mind-meld” with Milo?! I think I may need to lie down for a little bit.

It’s true, Milo and I have been in correspondence for almost three years now. Just ask Joe Bernstein. He knows all about the emails that I wrote to Milo back in autumn 2016—about Christianity and its role in Western civilization. Over the years, I have been suggesting books for Milo to read, and he and I have talked at length about the sex abuse crisis in the Catholic Church. Milo thanked me in the acknowledgements to his first book Dangerous (published two years ago July 4th) for “constant intellectual nourishment.” In return, I have mentioned him and his role in my conversion to Catholicism in podcast after podcast over the past two years.

It is hardly a secret that Milo and I talk. Nor is it a secret that I have been blogging about him and that he has shared many of my blogposts on his social media. Do my colleagues think perhaps to shame me by suggesting that I might have *gasp* taught Milo something?

The reality is far sexier.

Milo is not just my student. He is also my teacher. As much as I have taught him about the history of Christianity, he has taught me about how to write more effectively, both here and in my more scholarly prose. That “constant intellectual nourishment” I have given him? It is returned in spades by the advice that Milo has given me about capturing an audience’s attention and turning an argument to have the greatest effect.

I was not kidding when I told Tom Bartlett that Milo is a talented journalist who knows his craft. Why do you think Milo has been banned from almost every social media platform there is other than Telegram and Gab? Nobody in the conservative media ecosystem can command an audience the way Milo can. And it isn’t just because he is so beautiful. Have you ever watched the way Milo uses his hands to make a point? Or how he knows just how long to pause before delivering a riposte? Not to mention the richness of his vocabulary. I myself had to look up three words he used in one recent piece*—and I am famous for using words nobody else has ever heard of.

Milo has also advised me on my hair—have you noticed how much better it looks in my more recent videos?!—and he helped me with designing my set for my new course on Unauthorized.tv. Did I mention that we were friends? Friends don’t let friends go on camera without proper preparation! And, no, Milo did not help me with my script—but with our “mind-meld,” who knows? Wait, I thought I was supposed to be ghostwriting for him.

What an adventure these past three years have been!

Just think. This time in 2016, I had only barely heard of Milo. A year later, I was mentioned in the acknowledgments to Dangerous. And a year after that Milo wrote Middle Rages about me. Meanwhile, I have somehow found myself—mirabile dictu—overcoming my hatred of seeing myself on camera. Two years ago at Summer Nationals, I was asking my friend Ed’s advice about being on camera. I even made a few test videos, thinking I wanted to start my own YouTube channel. And here now I am giving lectures about medieval history on my very own television show!

Past me would have died of embarrassment before going on camera. Milo has taught me to be beautiful in ways I never imagined I could be, and it isn’t just to do with my hair.

The adventure has only just begun. 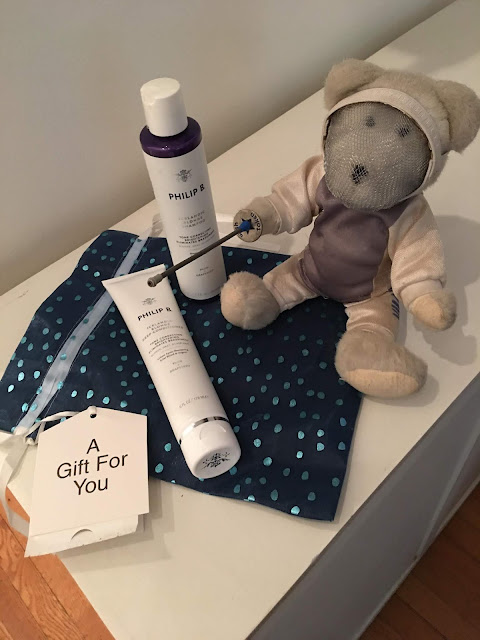 For Milo’s and my continuing adventures, see The Milo Chronicles.

For my version of the battle in medieval studies, see MedievalGate.

*hibernacle, ultracrepidarian, Kummerspeck. (You thought Middle Rages was scathing? Wait until you read Milo’s takedown of the klepto queens!)

I first read The Lord of the Rings when I was eleven. My mother gave me the boxed set (see above) for Christmas, and I read all four books in one trip to our grandparents’ house by New Year’s. Imagine my 11-year-old self struggling with the hobbits across Middle-earth as my mother drove us across the middle of America from Kentucky to Texas (and back again), and you will get some sense of the effect that it had on me.

Of all the things that drew me to become a medieval historian, reading (and re-reading, and re-reading, and re-reading) Tolkien is at the top of the list, although it took me decades to admit it. Tolkien lived in my imagination somewhere between stories I remembered reading as a child and my first (magical) visit to England with a school trip in high school—not really real, certainly not the stuff of serious scholarship.

Latin and Chartres drew me to study the history of medieval Christianity, not elves, hobbits and dwarves.

Or so I told myself.

The Church of the Left

If you doubt me, just read The ABC of Communism, co-authored in 1919 by Nicolai Ivanovich Bukharin (1888-1938, note date of death) and Yevgeni Preobrazhensky (1886-1937, ditto on date of death). Both Bukharin and Preobrazhensky became Bolsheviks as students, Bukharin in 1906 at the age of 18, Preobrazehnsky a few years earlier, in 1903. They were both actively involved in the revolution of 1917, and from 1918 Bukharin acted as editor of the Party newspaper Pravda.

"Why an ABC?," you ask. Because of course the first thing the Party needed to do was set up schools so as to catechize its members in proper doctrine. And schools need a textbook because faith, sorry, communism begins with knowledge. Why? Because "ever…
Keep reading