What do you see when you look at these two images? A patriot? A traitor? Which one is which? Have you had arguments with friends or family members the past ten days since these images hit our social media accounts? Have you lost friends over which label you put on which image?

After all, we’ve been here before.

Do you remember how angry everyone got over Trump vs. Hillary? I know, it seems a lifetime ago. How about Romney vs. Obama? That was so far back in the Dark Ages of this blog I couldn’t even remember the title I gave to the post, I just remembered I did the label thing. (I found the post by searching for “My guy.” I remembered the photo captions.)

“Mirror, mirror on the wall, who’s the ugliest of them all?”

Isn’t it remarkable how I can write basically the exact same post about how our biases affect the way we see the main characters in our national play every time we have a Presidential election? “Oh, no,” you will say. “This time it’s different! This time They are going to STEAL THE ELECTION and put us all into RE-EDUCATION CAMPS!”*

Mmmhmm... And Mitt Romney was going to kill Big Bird. 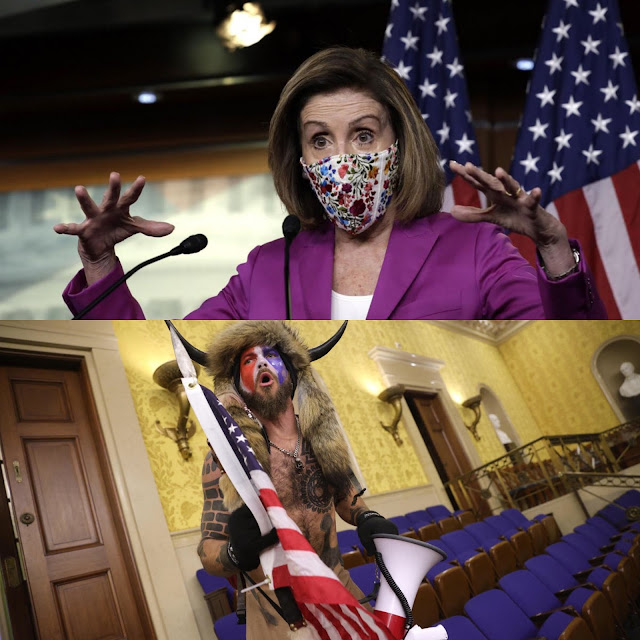 Here’s the thing: why do we keep falling for the drama?
I asked my Facebook salon (yes, I am somehow still allowed on Facebook!) what they thought of my juxtaposed images. “They both look like differently-themed Batman villains to me,” said one friend. “Bitch, fool—fool, bitch,” said another. (The latter is a Marine—could you tell?) A third tells me: “Both are traitors. One is very rich and has had control of a major state for generations.”
My Telegram chat was even more colorful. “Tell me what you see,” I asked them. One commented: “Peloski is the puppeteer of Q-Shaman and is secretly in love with his façade of vital masculinity. She dreams of harvesting his adrenochrome one day.” Another put it more mythologically: “I see the evil witch Circe above the mischievous wily Ulysses.” A third said: “Twins.”
Personally, I think Mrs. Pelosi is the Wicked Witch of the West, while Mr. Angeli (alias Mr. Chansley, alias the Q Shaman) is as American as Davy Crockett, but I understand that some of my friends and acquaintances see things a bit differently. (I get it, I get it—those camps!)
Mr. Trump gets it, instinctually if not consciously. People live to be part of a story, and stories are driven by conflict. Owen Benjamin has been talking for months about how we are living a script—he sees TrunQ as Zoolander. Vox Day talks about the importance of rhetoric and how the God Emperor knows how to use it (and is). Milo dresses perfectly for every occasion because who wouldn’t want to be perfectly dressed for the End of the World?**
The stories tell us—if we let them. 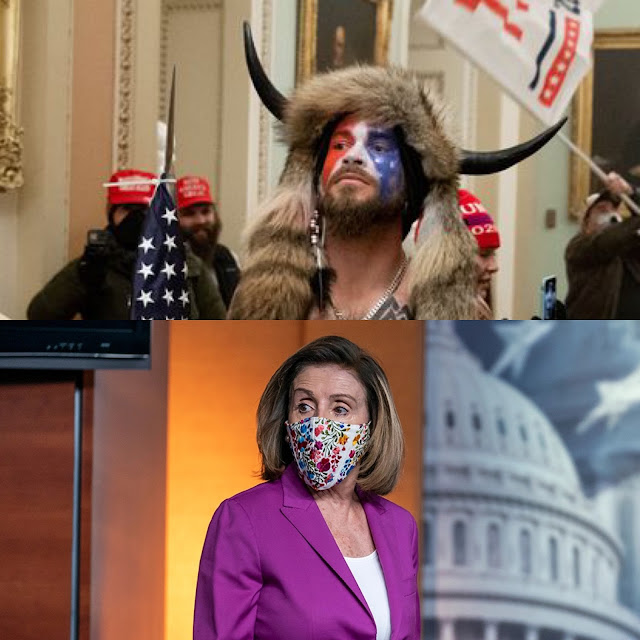 Whose side are you on? The witch’s or the warlock’s? The rich old lady’s or the vigorous young warrior’s? The leader of the elites’ or the champion of the people’s? The lady in the face diaper’s or the buffalo soldier’s? The career politician’s or the costumed activist’s? The Democrat’s or the Trump-voter’s? The woman’s or the man’s?
Do you see what I did there? I made you choose. I set you up with either/or choices—and emotionally charged each one.
Maybe you agree with my characterizations, maybe you don’t. But now you are caught up in thinking about the oppositions—which is the whole point.
Owen talks about these kinds of oppositions as fuel for psychic “batteries.” Think of the oppositions not as Right vs. Wrong, but as two-sides of the same coin, the polarities in a single fuel cell, driving each other in an endless spinning round, “real” only insofar as they exist as opposites—or, rather, only insofar as people accept them as opposites.
Think “alchemical” more so than “Manichaean,” although Manichaean dualities play the same driving role, each pole energized by the desire for Right over Wrong, but the system itself driven by the conflict between the invented poles.
Such batteries, when they are virtuous, drive civilizations.
The opposition between Country and City. The opposition between Nature (the world into which we are born) and Art (our making things in the world). The opposition between Thinking and Feeling. The oppositions between Mother and Father, the Old and the Young.
It is not the existence of yin and yang, masculine and feminine, hot and cold, life and death that is evil. God made both the day and the night, the sun and the moon, the animals and plants, the male and the female. What is evil is the construction of artificial polarities intended solely to put people at odds with each other—and off of which the demons feed. 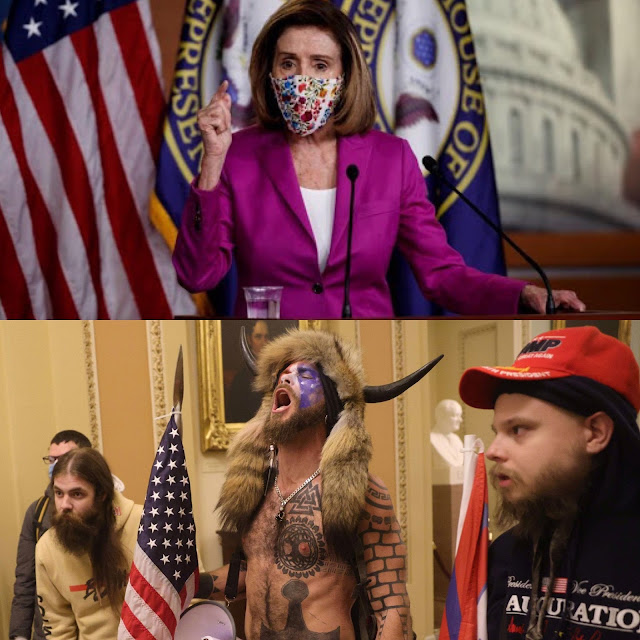 “Reminds me of an episode of Star Trek (TOS). The Omega Glory,” another of my Telegram friends said. “Two brightly-colored costume-wearing actors, both hamming it up for the cameras,” yet another declared.
We are watching a play. As I write, I am seeing videos on Telegram of military operations around the nation’s state capitals and in Washington, D.C. Are these typical troop movements? What are the National Guard doing sleeping on the floor of our Capitol building? Is our country about to erupt into civil war?

I can see both Mrs. Pelosi and Mr. Chansley as character actors. I can see them both as performing on a sacred stage (—as the guard in the Senate Chamber told Mr. Chansley as he walked up to the desk for a photo op: “This is like the sacredest place”). Both are acutely aware of the cameras and of the visuals they are creating, Mrs. Pelosi in her embroidered mask, Mr. Chansley in his face paint and furry hat.

Makes you wonder what the fuss is all about, eh? Over a couple of cosplayers?

Except, of course, it isn’t—or so the Story needs us to believe. One is a Patriot, and the other is a Traitor. One is a danger to the existence of our entire country; the other is speaking to the real concerns of the People. One is performing nonsensical rituals according to arcane rules in order to seize power over the nation; the other is chanting to heal.

The one invokes God’s blessing on our country; the other is serving Satan and all his works. 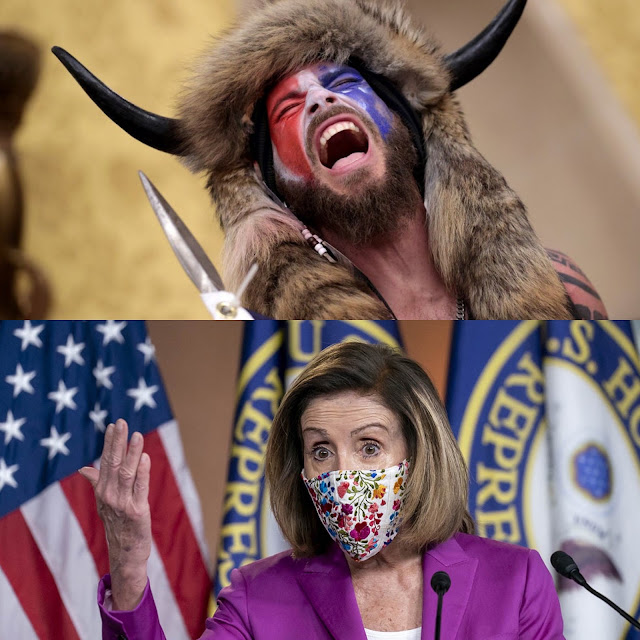 I know, I know. I have a hard time seeing the Patriot you do.

Ever wonder who wants us to have such a hard time telling the difference? 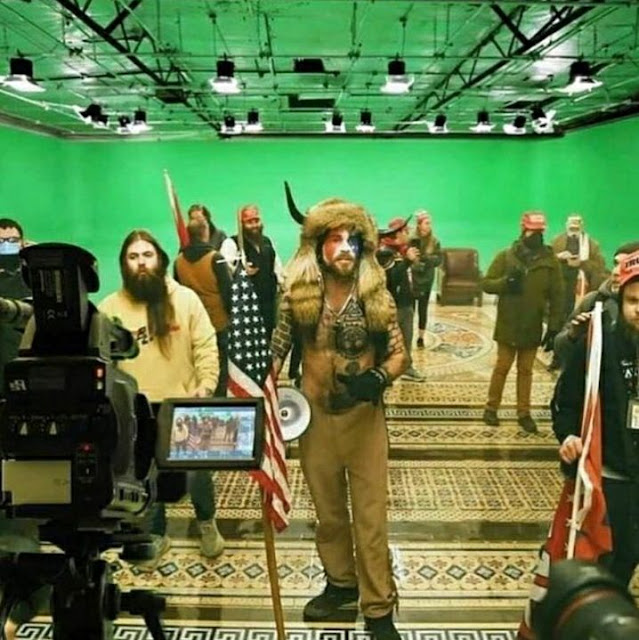 *Or force us all to have children and enjoy growing our own food. YMMV.

**I started a little Telegram poll the other day. To date, Owen (“Trunq is Zoolander”) is winning at 57%, but we haven’t gotten to January 20th yet, and Milo (“Trump’s a cuck,” 19%) has said Vox (“Trump is God Emperor,” 24%) is always right. Mind you, Milo has also said that holding out hope that Trump will do anything is a fool’s errand, so, again, YMMV. Rock, paper, scissors, anyone?