In which the dragons prepare themselves to set out on the sea of rhyme in a ship of octaves captained by Ulfilas, a bear of translucent fur and as yet untested faith... 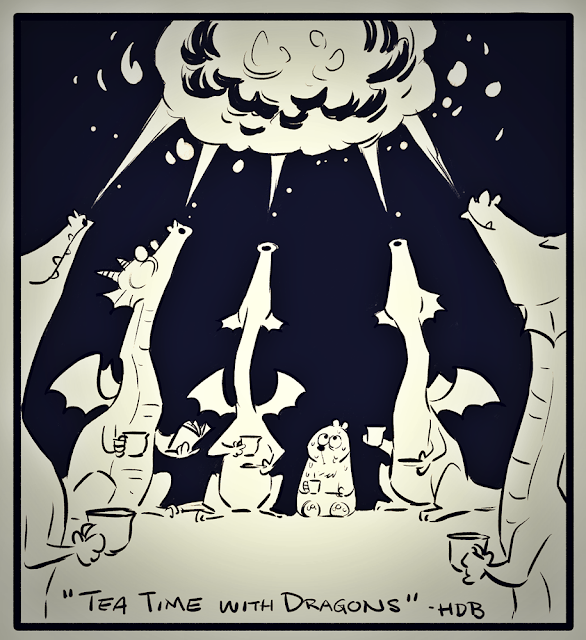 1
Shall I compare thee to a winter’s day?
No way! The name is Ulfie, and it’s clear
this poem won’t be one that sounds—um—gay.
This song will have us scribbling for a year.
We won’t exhaust our wit, nor things to say.
The lines we turned in love but yet we shear,
the tropes we craft with care but yet we strike
will hurt like crashing someone’s stolen bike.
2
O Ulfilas, born noble and at tea!
You fill our writing team with great unease.
We simply want some epic poetry.
Your name (so strange!) has caused our verse to freeze.
We brood with doubt and dread uncertainty.
You bar our entry into verse, you tease!
Let’s take a break for tea, and let our muse
inspire our bears to launch their Christian cruise.
3
A zeal took Ulfilas—he glowed somehow.
His fur had stored some rays of sun inside.
A strange wind dug into him like a plow
and cut the snow that hugged his thick white hide.
Into his heart, a mood blew with a howl.
His pulse shot up; his eyes were opened wide.
He looked for some adventure with his friends.
His mind was keenly focused on these ends.
4
Now one bear sailed from north to south alone.
Along the voyage three more joined his quest
to find the source of joyous light—a stone!
—and rescue Panda at a bird’s behest.
Uncharted waters swarmed with beasts unknown,
but bears’ hearts bravely beat inside their chests.
Through mighty winds and storms our bears prevailed
’til penguins on the icy wall they hailed.
5
Four bears set off to sail the icy seas.
The starry skies in Heaven were their map.
Their ship was pushed to China by the breeze,
where seals had caught a panda in a trap.
They freed him then pursued a promised gem
with penguins at the southern polar cap.
They answered riddles from a griffin then,
with treasure found, they sailed back home again.
6
We sing a tale of bears who sought a gem,
a pirates’ treasure lost for centuries.
Three brown and one translucent bear left home
to sail to where the ice wall meets the sea.
An albatross bore messages of hope.
A panda bear needs rescue from the seals!
The penguins guard the treasure in the ice—
a gemstone of the heavens, without price.
7
Lord, help us with our story to be told;
the animals are ready to set out.
Four brother bears, they stand before you, bold,
their quest to find a gemstone in the South.
Dread monsters they fear not, nor icy cold.
They want to know what life is all about!
Adventure calls! They board their ship and sail!
And thus with rhymes we now begin our tale.
*
These verses were written as an exercise in octaves (a.k.a. ottava rima), the stanza form perfected by Ariosto to tell the tale of Roland’s madness at losing the love of his life. Ariosto’s great Renaissance epic inspired poets from Spenser to Byron to try their hand at romance in the epic style, complete with voyages the Moon (to get Roland’s wits back) and battles between hippogriffs (okay, one hippogriff) and sea monsters. I think—I am only one canto into Barbara Reynold’s magisterial translation, and the most startling character thus far is Bradamante, the knight who just happens to be a woman. I kid you not!
After twenty-six years of writing and rewriting, Ariosto managed some 38,736 lines—4,842 stanzas of eight lines each. Thus far, we’ve crafted seven octaves—only 4,835 to go! Kidding. Maybe. Our plan is much more modest—a mere 101 stanzas in five acts. Our first task as poets was rehearsing the meter (iambic pentameter) and learning the rhyme scheme (abababcc). We also needed to get the narrator’s voice clear—what mode we would be telling our story in. Not too high, but not too sing-songy. Just right for a tale of Christian virtue. And bears!
We’ve got our verses on—now onward to Antarctica! To be continued...