How to Read the Pool Results 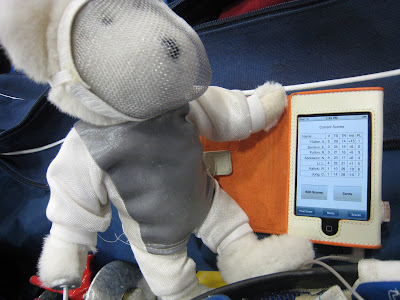 There were seven fencers in the pool, against whom I came in 5th with three victories and an indicator of +5. As far as I can recall (I haven't been very good at keeping a record of my results this past year), this is one of the best indicators I have had. I am particularly proud of the score in the third column: TR, for "Touches Received." Note that while I only won three of my bouts, I had the second best TR in the pool. Which means that I only gave up two touches in the bouts that I actually won. What the chart does not show is that I beat one of the fencers 5-0 who won four of her bouts and that I only lost by one touch in overtime to the other who won four. The only fencer whom I could do nothing against was the one who won our pool. So, all in all, a good pool round!
fencing tournaments