October 30, 2009
The week that was, according to my Facebook profile.

17 minutes ago: "The discourse of history as such replays (in parodic form) the eroticization of linguistic transparency." [Linked to Make Your Own Academic Sentence, courtesy of the University of Chicago writing program.]

23 minutes ago: "Here are the eyeballs." 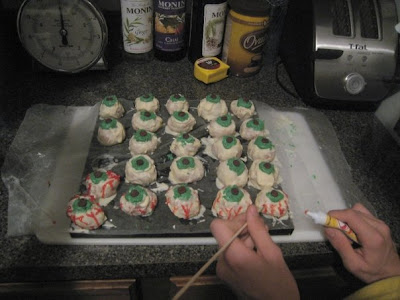 24 minutes ago: "F.B. has a fridge full of confectionary eyeballs and a son with a fever too high to take his creations into school today." [Update: he woke up feeling better and insisting that he could wear a mask with his costume.]

Wed at 1:13pm: "F.B. decided to pretend that she had a dog and so took the almost-unheard-of step of taking herself for a walk across campus, only to meet...a Cardigan Corgi in the middle of the quad! Enough signs, we're getting a puppy!" [15 comments and one "Like"].

October 26 at 10:21am: "F.B. thinks that now might be a good time to talk (sic) the dog for a romp around campus. If only I had a dog. Sigh. Back to grading papers without a doggie break!" [7 comments]

October 23 at 12:18pm: "It is such a pleasure talking to sales representatives who actually know the products they are talking about. Makes me feel smarter being able to refer to something and have them undesttand! (sic)"
Facebook