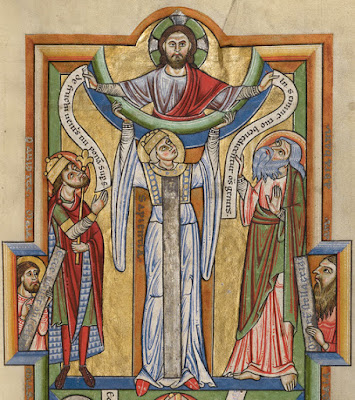 Steely. Concentrated. Able to take no for an answer. And to listen.

It is there in their jaw and forehead, as well. Firm. Hard. Severe even.

They stand tall, their shoulders back, chests expanding into the world. Confident. Dominant. Regal.

Like Mufasa at the beginning of The Lion King. Or Simba at the end.

Capable of both justice--and mercy.

What does it mean when you see someone with this kind of face?

It's complicated, but it has something to do with the neurotransmitter serotonin. Higher levels of serotonin are associated with expression of dominance, with effects on both posture and face.

According to Professor Jordan Peterson (at 19:18):

What [this kind of face] means is [a person] has integrated his aggression. I've seen this happen in my clinical clients. When they come in and they're too agreeable, they look like Simba looks later in the movie, when he is an adolescent. He's sort of like a deer in the headlights. Everything is coming in and nothing is coming out. But when the person integrates their shadow and gets the aggressive part of themselves integrated into their personality, their faces harden. And if you look at people you can tell because the people who are too agreeable look childlike and innocent, and the people...well, a hyperaggessive person will look mean and cruel...but I've seen people's face change in the course of therapy. Men and women. And what happens is they start to look more mature and it's more like they're judging the world as well as interacting with it properly once they integrate that more disagreeable part of themselves. It's very, very necessary. And that's part of the incorporation of the Jungian shadow or the incorporation of the unconscious from a Freudian perspective.

It's what happens when you stand up to the bullies--and don't back down.

I've noticed my face looks different in more recent photographs. I thought it was simply because I have lost so much weight. (I'm down from a size 12 to something like an 8 since October. Yay, low-carb diet!) There is that, my face is thinner. But my jaw looks much stronger than it used to--something in the way I have been holding my mouth? Sometimes I even see it in my eyes.

It is what Wisdom promised those who listened to her. To be wise, you must know how to be cruel, knowing good and evil. Otherwise, as Professor Peterson says, you are simply harmless--and prey. Wisdom comes from knowing yourself capable of cruelty--and then not being cruel. Except sometimes you have to be, in order to speak the truth.

Wisdom cries aloud in the street; in the markets she raises her voice; on the top of the walls she cries out: at the entrance of the city gates she speaks: “How long, O simple ones, will you love being simple? How long will scoffers delight in their scoffing and fools hate knowledge? Give heed to my reproof; behold, I will pour out my thoughts to you; I will make my words know to you. Because I have called and you refused to listen, have stretched out my hand and no one has heeded, and you have ignored all my counsel and would have none of my reproof, I also will laugh at your calamity; I will mock when panic strikes you, when panic strikes you like a storm, and your calamity comes like a whirlwind, when distress and anguish come upon you. Then they will call up on me, but I will not answer; they will seek me diligently but will not find me. Because they hated knowledge and did not choose the fear of the LORD, would have none of my counsel, and despised all my reproof, therefore they shall eat the fruit of their way and be sated with their own devices. For the simple are killed by their turning away, and the complacence of fools destroys them; but he who listens to me will dwell secure and will be at ease, without dread of evil.” --Proverbs 1:20-33 RSV

My medievalist colleagues on campus have been busy organizing panels to counter the threat that my speaking has posed. There is one next Monday entitled “Difficult Subjects: Strategies for Public Engagement and Pedagogy,” asking “how scholars and students can develop strategies for teaching sensitive topics such as race, ethnicity, gender, and sexuality...in an increasingly volatile social and political climate.” There is one later this month on “Global Medievalisms: Notes from the Fields,” intended to confront “the range, effects, limitations, blindspots & irrelevancies of the ‘medieval’ and ‘medievalists’ in and beyond the ‘European Middle Ages.’” And there is a workshop this weekend at the International Medieval Congress in Kalamazoo, which I know some of my Chicago colleagues will be attending, on “Whiteness in Medieval Studies” sponsored by my old friends from the Society for Medieval Feminist Scholarship. Their goal is “to explore how medievalists in all areas of study can be effective allies for diversity and inclusion within our institutions and across our field.” They are particularly worried about “[disrupting] the white supremacist attraction to our field as well as [advancing] medieval studies’ own rigor, ethics, and vitality.”*

I am going to be fighting a lot of snakes.

*I'm pretty sure this one is about me, although they do not name me. According to friends, Dorothy Kim has been busy on the SMFS Facebook page talking about the “virulent white supremacy and manosphere stances” of “our two senior medievalists,” meaning, I believe, myself and Allen Frantzen. Apparently I am a “pundit”!

RLFB as Lady Wisdom: Photographs by JP Brown, meme by Joshua Arguien. (Photographs taken in January. I am even thinner now.)

[UPDATE: It was this kind of hoodie-wearer that my friend Joshua was thinking about when he made the meme. Think Zorro leaving his mark for freedom of speech.]

I first read The Lord of the Rings when I was eleven. My mother gave me the boxed set (see above) for Christmas, and I read all four books in one trip to our grandparents’ house by New Year’s. Imagine my 11-year-old self struggling with the hobbits across Middle-earth as my mother drove us across the middle of America from Kentucky to Texas (and back again), and you will get some sense of the effect that it had on me.

Of all the things that drew me to become a medieval historian, reading (and re-reading, and re-reading, and re-reading) Tolkien is at the top of the list, although it took me decades to admit it. Tolkien lived in my imagination somewhere between stories I remembered reading as a child and my first (magical) visit to England with a school trip in high school—not really real, certainly not the stuff of serious scholarship.

Latin and Chartres drew me to study the history of medieval Christianity, not elves, hobbits and dwarves.

Or so I told myself.

The Church of the Left

If you doubt me, just read The ABC of Communism, co-authored in 1919 by Nicolai Ivanovich Bukharin (1888-1938, note date of death) and Yevgeni Preobrazhensky (1886-1937, ditto on date of death). Both Bukharin and Preobrazhensky became Bolsheviks as students, Bukharin in 1906 at the age of 18, Preobrazehnsky a few years earlier, in 1903. They were both actively involved in the revolution of 1917, and from 1918 Bukharin acted as editor of the Party newspaper Pravda.

"Why an ABC?," you ask. Because of course the first thing the Party needed to do was set up schools so as to catechize its members in proper doctrine. And schools need a textbook because faith, sorry, communism begins with knowledge. Why? Because "ever…
Keep reading