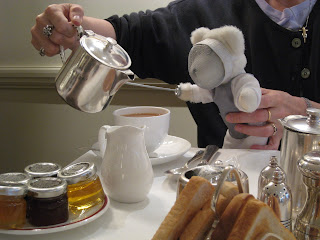 Thanks to the generosity of my father-in-law, we’ve been living in luxury these past two weeks in one of Marylebone’s finest old family-owned hotels. Every morning, our beds are made, our tea is poured and our food is cooked for us by the smiling, courteous, and well-dressed staff. We have had no shopping to do, no dishes to wash, no table to set; everything is there for us, ready when we come down to breakfast in the morning or return to our rooms in the evening after a day of sightseeing or (in my case) work. You would think that this is a life we could all too easily get used to, being waited upon. And yet, after the first day or two, once we had recovered from jet lag and could conceivably take care of ourselves again, it started to wear a bit, at least on me. Was it humility that was making me uneasy—the thought that I did not deserve to be waited upon in this way—or was it pride?

I wonder. We like to think that we would prefer to be waited upon, hand and foot, as it were, but look at how uneasy Peter seems here, that his Lord should be washing his feet. 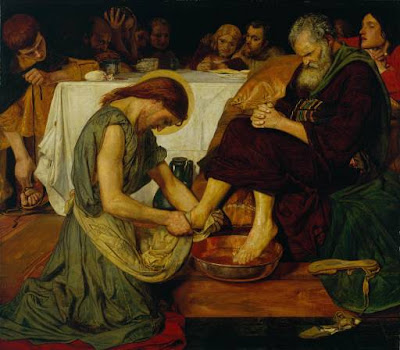 According to John, when Jesus finished washing his disciples’ feet, he then told them, “Now that I, your Lord and Teacher, have washed your feet, you also should wash one another’s feet. I have set you an example that you should do as I have done for you. I tell you the truth, no servant is greater than his master, nor is a messenger greater than the one who sent him.” Which is highly ambiguous, if you think about it. Was Jesus showing that he, as Teacher, was not greater than his students by being willing to serve them? Or was he suggesting that they, his students, were not greater than he? Who here is the servant and who the master?

At breakfast, when I wanted more toast or tea, I might ask one of the staff for more, but, it not being my house or my kitchen, I could not get up and simply get more. I had to wait to be served. On the one hand, this meant that I did not have to get up, but on the other, it meant that I had to be patient. Perhaps the waiter or waitress was taking care of somebody else. Perhaps he or she had left the room and could not see me signaling for more. In either case, I was, in effect, helpless until the server would come. Was I, as paying guest of the hotel, master here? I am not entirely sure that the situation would be significantly different if it were my house and the servers in fact my servants. They would, of course, be acting under my orders, but if my orders included serving me at table, again, I would still have to wait for the food to be brought to me. As master, I could not leap up and run to the kitchen, for then there would be no reason for my servants to serve me. There is, it would seem, a helplessness in being served that belies the apparent status differential between the one who is serving and the one who is served.

Look again at Ford Madox Brown’s picture. Peter has somewhat grudgingly allowed Jesus to wash his feet, but only after Jesus explained to him, “Unless I wash you, you have no part with me.” Unless, that is, you allow me to serve you, you have not submitted yourself utterly to me.

This weekend, interestingly enough, my father-in-law took my son and me to have tea with a real--that is, hereditary--English lord and lady, whose family title goes back to the sixteenth century and who are living in the same house that his ancestors (and namesakes) have inhabited since that time. They have staff to care for the extensive and exquisitely designed gardens, to work in the public tea room and to show visitors around the more historic parts of the house, but they themselves have no servants, and it was the lady of the house who served us tea. It would have been pride, indeed, to think that it was inappropriate for her to serve us, as it was her home and we were her guests. But nor was it, strictly speaking, humility on her part to serve us. In the course of the visit, my son asked about a button that he saw on the wall, and our host and hostess explained that it used to ring a bell in the hallway back in the servants’ part of the house so that the staff would be alerted that they were needed in this or that particular room. When we asked, our hostess even showed us the row of old bells, complete with tags for the different bedrooms that they used to ring for.

I had been thinking about Brown’s painting which I saw the Sunday before this in the Tate, and it came to me when I saw these bells how great a mystery Christ’s service really was. It is hard to serve, but it is likewise hard to be served. One must be truly humble in order to accept it.
Fencing Bear Ford Madox Brown humility service