MY BOOK IS OUT IN PAPERBACK!

November 03, 2019
Would you like to learn to pray like a medieval Christian—but couldn’t afford the luxury hardcover edition? Wait no longer! Mary and the Art of Prayer: The Hours of the Virgin in Medieval Christian Life and Thought is now available in paperback as well as in hardcover and eTextbook editions. You can purchase on Amazon or directly through Columbia University Press. For a taste of the sweetness, read chapter 2 here! 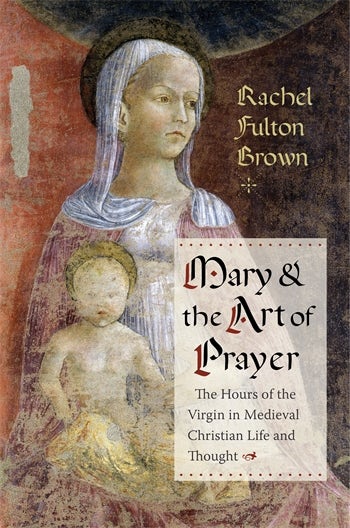 This volume is a stunning accomplishment―beautifully written, scholarly, and inspiring. Using medieval sources, it gives a detailed presentation of how the man or woman of the late Middle Ages may have read a book of hours. The resonances and allusions of each word and image are teased out so that the modern reader is able to engage the ancient devotion from, as it were, the inside. Both secular scholars and theologians will find their work enriched by reading Mary and the Art of Prayer. It leads the reader into the world of late medieval religious practice and sets an excellent example of method for future research.


—Sarah Jane Boss, director of the Centre for Marian Studies, author of The Spirit of Mary

Deliberately (and often delightfully) provocative, Rachel Fulton Brown’s book takes on Hilda Graef’s classic Mary: A History of Doctrine and Devotion (1963-65) as its sparring partner. Fulton Brown highlights thirteenth-century Mariological writings that Graef treats only briefly and dismissively: Conrad of Saxony’s Speculum Beatae Mariae Virginis, Richard of Saint-Laurent’s De Laudibus Sanctae Mariae, and the famous Mariale Super Missus Est (until 1952, attributed to Albert the Great). Countering Graef’s criticisms of these works as “questionable,” “popular,” “unhealthy,” and manifesting “signs of decadence,” Fulton Brown endeavors mightily to recover them as reflective of the theological vitality of an age deeply inspired by the Wisdom tradition of the Bible and by the prayer life of the faithful.

—Ann Astell, author of Eating Beauty: The Eucharist and the Spiritual Arts of the Middle Ages

Mary and the Art of Prayer brings medieval Marian devotions before the readers’ eyes and elucidates the profound meanings in and spiritual preparations for serving the Virgin―Holy Wisdom, Queen of Heaven, and Container of Creation―through observance of her Hours. Rachel Fulton Brown’s historical imagination is informed by brilliant scholarship, and her evocative prose rests easily beside citations of beauteous psalms.


—Georgiana Donavin, author of Scribit Mater: Mary and the Language Arts in the Literature of Medieval England

Mary and the Art of Prayer is packed with information and insight, inviting the reader not just to examine medieval devotion to Mary but to experience that devotion. Medieval Christians had a rich and ancient tradition of devotion to the Lady of the Jerusalem temple. The reader is deftly drawn into the candle-lit Middle Ages, to read the Scriptures as the faithful read them, and to pray with them, not just to examine their practice of prayer. Based on many years of research, Mary and the Art of Prayer offers a huge collection of devotional material, all translated into English. Much of this is little known outside specialist circles. This book is a labor of love, written with real understanding.


—Margaret Barker, author of The Great Angel and The Mother of the Lord

No persuasive account of the Virgin can now ignore the liturgical and exegetical sources on which [Brown] lavishes such scrupulous care. And more than fifty years after Vatican II, the Council’s Mariology is ripe for reassessment. Mary and the Art of Prayer could well be a game-changer in that conversation.

Given both its size and unique methodology, Mary and the Art of Prayer will challenge its readers to reconsider how they interpret the categories of “medieval”, “imagination” and “devotion.”

This book is the product of massive and original scholarship....the book requires an almost total rethinking of how we look on Mary today, this in the light of how medieval Christians understood her.

Brown makes the experience of the Hours of the Virgin come alive through the methodology of the book itself, which engages the reader through the structure of the Marian Office. . . . This book represents the best of traditional textual scholarship, with an innovative structure that captures the imagination.

If you would like to learn to pray like a medieval Christian, this book is for you.

Easy to read. Didn't know of the rise of the cult of the BVM until this. Raises the heart in prayer.


I am so glad to have rediscovering this history is so Mary how how people devoted their life around her. Great book for anyone who desires to know why Mary is so important for Catholics.
—Lodwin, Amazon 5-star review


Fantastic scholarly book that explains to the layperson how Mary became such a central part of medieval prayer and hence modern Catholic prayer. The book explains the history of how Mary became increasingly popular beginning around the year 1100 as elaborate books [dedicated] to her appear throughout Europe (the Book of Hours) and services in praise of her become routine. In addition to an analysis of historical records and devotional material, the author also examines the practice of medieval prayer and how it likely differed from modern concepts of prayer. Finally, the author explains the specific appeal that Mary would have had for those attending a church service during this age. You will never think about prayer in the same way after reading this book!

For in-depth reviews, see Nils Zumbasen at Facts and Stories and Normal Dass at The Postil Magazine.

For more on my journey in search of the Lady, see The Lady and the Logos.

For interviews about my book, see Bear On Air.